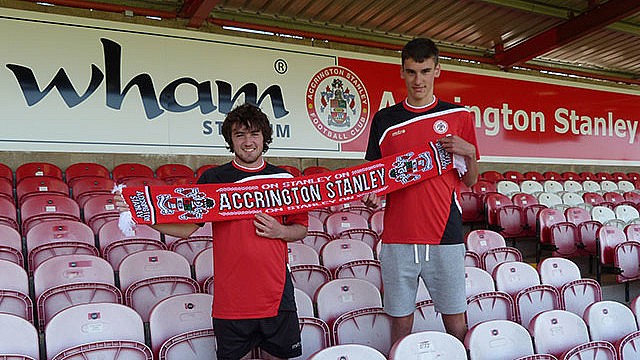 Nathan Webb and Ross Sykes have both signed professional contracts with Accrington Stanley.

Striker Webb, 18, has signed a one-year professional deal while first year scholar Sykes, 17, has put pen to paper on a two-year contract.

Webb has been a big part of two successful FA Youth Cup runs – he was 15 when the youth team were knocked out by Reading in the last 16 of the competition and this year they lost at home to Crystal Palace after a good run, getting to the third round. 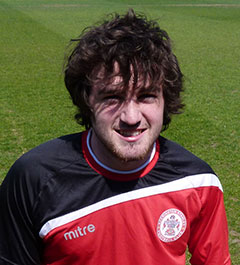 “I am really excited,” said Webb, who was picked up by Stanley scouts when he was an Under 15 playing for Glossop North End.

“I have been here four years and it’s a great feeling to sign a professional contract. You never think it will happen and now my aim is to play for the first team.”

Webb has already had a taste of first team action, being involved in last pre-season and he has also been on loan at NWCL side Nelson this season.

“I have scored 20 goals this season, 18 for the youth team and two for Nelson. It’s been a good experience playing for Nelson, it’s harder than youth football but not as good a standard.

“It will be great training with the first team next season, I am a bit worried about it as it’s a step up but I am excited.”

For Sykes it’s second time lucky after the Burnley-born defender was released by the Clarets. 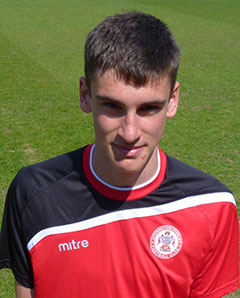 “I was with Burnley’s Academy from being 11-13 and then I was released. I wanted to give up football for a year but my mum told me to keep going and I went on a trial to Accrington and was signed up.

“I love it here, I have really enjoyed it and the coaches here have helped me  as I have been growing up.

“It’s amazing to get a two-year professional contract, I do not know how to describe it.”

Tall Sykes has scored four goals this season – three with his head.

“I have scored one good goal!” he added. “I will train with both the youth team and first team next season and hopefully it will bring me on.”

Head of Coaching Dave Fitzgerald said:  “Congratulations to these lads who have been offered their first professional contracts, a reward for the ability and work they have put in since being in the Academy.

“It is great to see players who have come through our Academy system over recent years achieve this accolade. It sets a good example for our younger players and shows the support from the manager to give these players this opportunity.

“It is just the start of it for them – they now have to work even harder and become even better when they become professionals and continue their development.

“For Ross and Nathan we thank them for their efforts throughout their time at the Academy, and all the hard work they too have put in.”