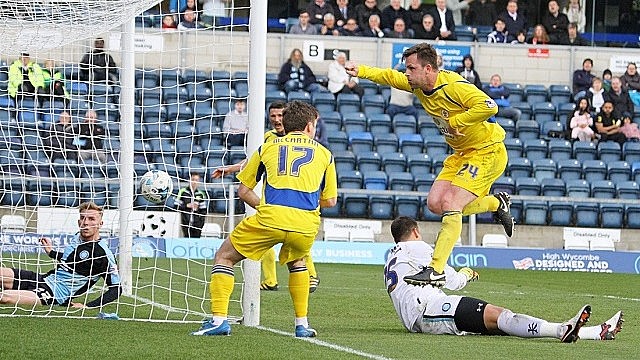 Mark Hughes is delighted to sign a new deal with Accrington Stanley – and is confident the Reds can build on last season.

Stanley suffered promotion heartbreak, missing out on going straight up into League One on the final day of the season and then play-off disappointment when they lost to eventual winners AFC Wimbledon.

Defender Hughes came to Stanley in January following his release from Stevenage and played a big part in helping guide the Reds to fourth place. He has signed a new one-year deal with a one-year option.

“Once I knew the manager wanted me to stay I wasn’t a hard decision and I am glad to get it done sooner rather than later and start looking forward to the new season,” said 29-year-old Hughes, who signed an initial six month deal in January.

“I have enjoyed my time here. It took me a while to get into the team but personally I am happy with the way I performed.

“If I can do like I did in 12/15 games I played last season and take it into next season, I will be happy.

“Obviously it ended in massive disappointment but it’s a learning curve and maybe it will stand us in good stead next season.”

Hughes admitted he is still getting over the way the season finished for the Reds.

“It was tough, I hardly slept for a week after I couldn’t watch the Plymouth v AFC Wimbledon final as it was pretty sickening.

“But what can you do? It’s not the end of the world. It felt like it was at the time but life goes on and we go on to a new season. Hopefully we all know what we can do and we can push on and have a good go next year.”

Hughes is the first to sign up with Seamus Conneely, Sean McConville, Billy Kee and Matty Pearson already under contract for next season.

“Usually, when team does well, there are lads who do well and will maybe not be here next year for whatever reason.

“It’s down to the manager to regroup but we know the management team here are very good at that, we have seen it in the past.

“And there is a  good nucleus here now with Sean, Seamus, Billy and Matty who did well last year and now myself.

“There is a good core and if new people come in we can make the bedding in easy.”

Now Hughes is focused on giving his all for the Reds in the 2016/17 campaign.

“I am going on holiday and signing a contract does make it easier as I can enjoy the next three or four weeks left before it’s time for the dreaded pre season which we all hate.

“It will be harder for Accrington next season as other teams won’t be thinking ‘it’s little Accy.’

“Now they will be thinking ‘it’s Accy who are probably the best footballing team in league who can give anyone a game.’

“It was visible towards the end of season when teams at home gave us a lot of respect and we drew a lot of games. They made it hard for us to break them down but we can learn from it and we can break teams down.

“Look at teams coming down, like Doncaster and Blackpool, it’s not going to be easy but, saying that, they are closer than Bristol and Northampton so it’s better in that way.

“We are still disappointed from last season but hopefully it will stand us in good stead for new one.”