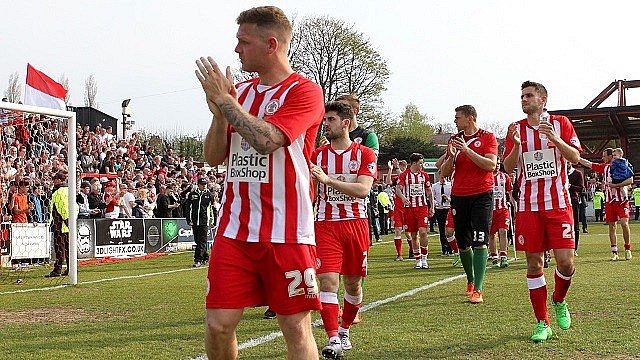 Piero Mingoia admits the players will have a day to think about on what might have been but by Monday the full focus will be on AFC Wimbledon.

Stanley were just a minute from securing a historic promotion to League One but Bristol Rovers scored in injury time against Dagenham which meant they jumped into the automatic spots and Stanley dropped to fourth.

The Reds couldn’t score for the first time at home this season despite hitting the post three times in the last 15 minutes and now they will travel to seventh placed Wimbledon on Saturday before the Dons come to Stanley a week on Wednesday in the play-off semi-finals.

“Like all the lads I am absolutely heartbroken,” said the winger after the game. “It’s probably the worst feeling most of us will ever experience in our careers whether we have long or short careers.

“But it is what it is and we owe it to everyone and ourselves and our families to give it absolutely everything in the next two games.” 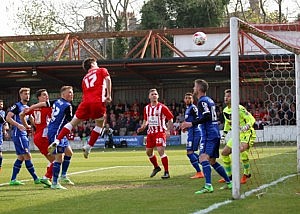 rough with Oxford moving up to second spot after a commanding win against Wycombe.

“Sometimes in this sport it’s just not your day. In the first half we didn’t play as well as we would have liked, maybe  the occasion got to us a bit, but in the second half we gave it a real good go.

“We hit the post and crossbar three times and sometimes it’s signalling your destiny.

“I had a couple of fans telling me it’s 1-1 at Bristol and you are thinking it doesn’t look like it’s going to go in for us today but maybe we will scrape through.

“Then a fan told me it had finished 2-1 at Bristol and we were still playing. I tried to pass it on to the rest of the team, we got everyone up, Ross (Etheridge) came up, but it just wasn’t our day.

“In the dressing room after, everyone was devastated but the gaffer and Jimmy (Bell) and some of the senior players who have experienced it before said to keep your heads up. It’s disappointing now but we have to get ready for Wimbledon.”

And Mingoia said they will have no problem raising their game for Wimbledon.

“It’s our job, it’s what we get paid to do. If someone puts a game in front of us we have got to go out and give it absolutely everything.

“Last night and today everyone is gutted but as soon as we turn up on Monday we will have one objective in our heads and that’s to beat Wimbledon in the play-offs.”

There was a sell-out home crowd at the Wham Stadium who tried to urge the side on and Mingoia hopes they turn up again in their numbers in the play-off semi-final.

“The atmosphere was unbelievable and the occasion was superb. We all dreamed of making it to five o’ clock when the atmosphere would be buzzing, there would be a pitch invasion, but it didn’t go that way and we have to reward the fans in a different way now.

“I think Preston and Southend experienced something similar to us, missing out on the final day but winning the play-offs, so it shows it is possible to pick yourselves up and go again.

“We are now doing it the hard way and to win at Wembley is the best way to go up – but we have only got Wimbledon in our heads at the moment.”