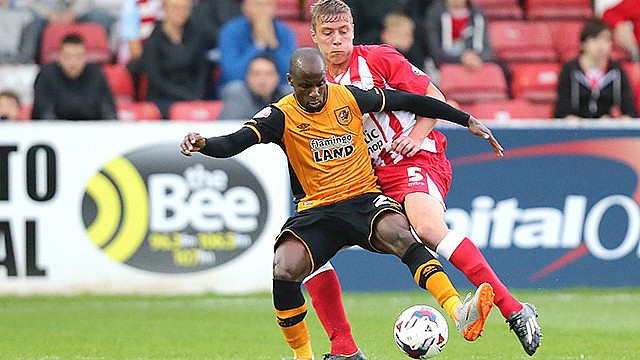 Tom Davies feels Stanley can pick themselves up from their last gasp defeat in the first leg defeat of Saturday’s semi-final and turn the tie around on Wednesday.

Tom Beere netted the only goal of the game in the 93rd minute on Saturday to give AFC Wimbledon a 1-0 advantage going into the second leg.

After missing out on automatic promotion on the final day of the regular season defender Davies is determined to put things right.

“At the moment it’s hurting like last Saturday did but this time we can do something about it,” he explained. “We’ll be in front of our home ground so we’ll pick ourselves up again and go again on Wednesday and hopefully turn it around.

“We played well in the first half. The gaffer told us he wanted us to come out in a certain way and we felt that we did that. In the second half they did well to pin us in and it felt like there was just a bombardment of balls into the box.

“Unfortunately with two minutes to go it finally told and they got themselves a scrappy goal which we feel could have been avoided and they shouldn’t have been allowed to get into that position. It’s only half time in the tie and we’ll go again on Wednesday.

“There were plenty of stages in the build up where it could have gone our way. The referee could’ve stopped it a couple of times and from our point of view we could’ve put it into row Z. It kept coming into the box and their lad finished it well in the end.

“We had chances of our own. I had one at the end, Shay McCartan forced the save from their keeper and Tariqe hit the post. It’s a horrible feeling but we’ll still go into the second game full of confidence.”