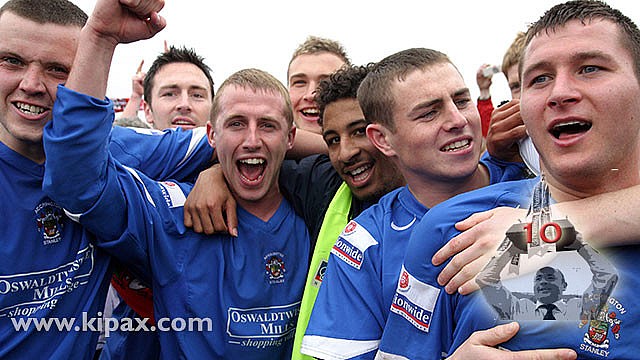 The defender, who was renowned for scoring a couple of 40 yard plus wonder goals for Stanley and Altrincham, was part of the side which ten years on Friday, clinched a return to the Football League at Woking.

Welch was a terrace favourite – a popular character whose work-rate and honesty won over the Reds fans.

And he admitted coming to Stanley at the start of that landmark 2005/6 season was a bit of a fluke.

“I had left Macclesfield and I only came a few weeks before the season started as I didn’t have another club and I originally only signed a six month deal,” said the 34-year-old, who now manages Cheshire side Middlewich part-time and is an area manager.

“I didn’t know much about the squad or the club but I landed on my feet. I did wonder where I had come to as the Scousers like Gary Roberts and Ian Craney were bouncing around the changing room all the time but it was a great time.

“I had never been part of a squad like it. I had been used to managers who drilled things into you and it could get monotonous but Coley and Jimmy were very off-the-cuff and it was never dull!

“There were arguments but it was only because they wanted to win so much. We had a laugh on and off the pitch, the Scousers were mad and it was a party bus every journey home.

“We still got that ‘little Accrington’ tag a lot, we defied the odds every year and we just took the league by storm.

“I remember Grays away quite early in the season and I think then we knew we would win it. I remember Halifax over Christmas where it was a great atmosphere and Coley’s speech half-time at York where he told us to be ‘carried off on our shields’ and we turned it around.

“Then I remember Woking and the pitch invasion. The Scouse group were always confident we would do it but I was a bit reserved until that day. We didn’t play well but team spirit got us through.

“I shouldn’t have played as I had hurt my shoulder the week before and was in pain but there was no way I was missing it!”

Welch, who had to retire with an ankle injury, is still in touch with keeper Rob Elliot, Paul Mullin, David Brown, Steve Jagielka and Andy Tretton as well as Mark Boyd and various others on social media.

“I did bump into Gary Roberts at a boxing match but he was at the front as he is a big hitter and I was on the cheap seats which says it all really!

“Leam (Richardson) was my left back wing-man on the pitch and he has gone on and done well in coaching and management.

“I keep tabs on Stanley’s results and Coley always had a great eye for a player – he could spot a player a mile off and that’s why I am sure they will do it this season as well.”

Welch added: “My Conference medal is framed at my dad’s house. In 2005/6 we were a small club on a small budget with a small squad and I am not sure any team has ever matched that achievement since.”

The official website will have memories of the 2006 promotion campaign from now until the anniversary of the Woking game on Friday.

To relive the historic game at Woking visit theKipax gallery