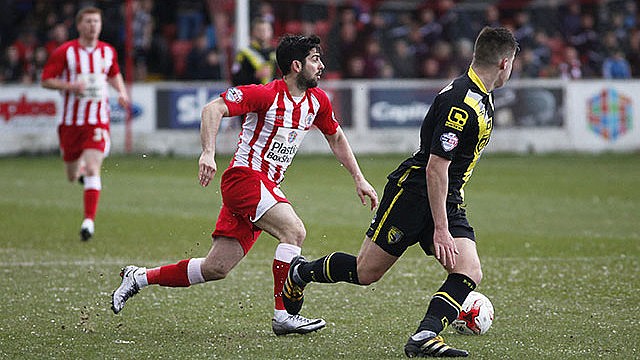 Piero: “get the job done”

Piero Mingoia is a man on a mission to help Stanley win promotion to League One, whether it’s this weekend or on the final day of the campaign.

The 24-year-old has been involved in a relegation battle, a season of change and now a campaign at the top of the table in his time at the Wham Stadium.

Now the former Watford man has just one aim.

“We’ve said from day one that there’s only one ambition and that’s promotion,” he explained. “We can smell it now. We’ve got to go out there and get the job done.

“There are nerves but there’s plenty of excitement too. The boys seem quite relaxed. Obviously being where we are comes with pressure and everyone knows that but everyone just believes that if we perform we will get results. That belief and concentration and doing your job right is the key. If we get the performance level right then usually we get the points we want.

“The lads are relaxed this week. There’s a nice atmosphere in and around the ground every day. Once we get to Wycombe we know what we have to do.

“We’ve outplayed teams and seen them in the automatic places, looking up at them for the majority of the season and striving to get there. Now that we’re there we don’t want to let it slip. Everyone will be doing their bit to stay there.

“I think I’ve been through it all in three years here. It’s very different to a relegation battle and obviously this is where you want to be. It’s great to be challenging at the top but we haven’t achieved anything yet and until we actually do it I won’t be saying anything else.”