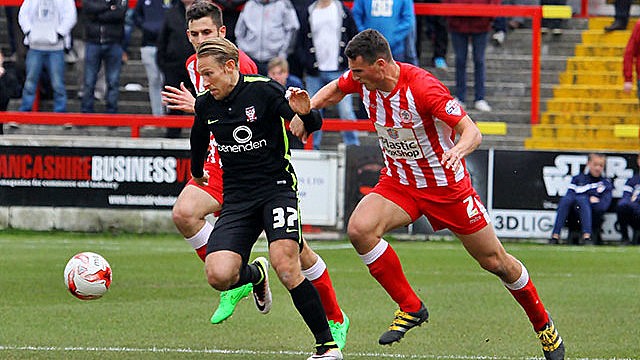 Matt Pearson says he doesn’t expect nerves to get the better of the Reds.

Stanley are in second spot with four teams fighting for the two automatic promotion places left.

The Reds travel to Wycombe this Saturday and then Stevenage at home the following Saturday knowing two wins will send them into League One.

“To be honest, Idon’t think there are nerves, I think our confidence has grown throughout the season,” said defender Pearson, who has signed a new contract at the Wham Stadium.

“We know we have the tools to go out and win both games and the way the lads are playing, especially the forward players who are on fire, we all believe we can do it.”

“We know Josh is a good player, we did miss him when he was out through injury but he has come back and his goals have been vital.

“Tariqe – we don’t have another player like him. He has pace, he is exciting to watch and he gives us something a bit different.”

Stanley are currently on a 10-game unbeaten run and Pearson admits it’s been impressive.

“We have been on an unbelievable run and now the aim is not to lose before the end of the season.

“I won promotion with Halifax from the Conference North but this will certainly top that.

“Everything has fallen into place this season, with the new owner coming in, the players here and obviously the results we have had but we know it isn’t over yet.

“We are trying not to think about it as there are two big games left but it would be a great achievement for the club and you do briefly think about playing the likes of Bolton and Sheffield United next season – that will be a different level – but we haven’t achieved anything yet.”