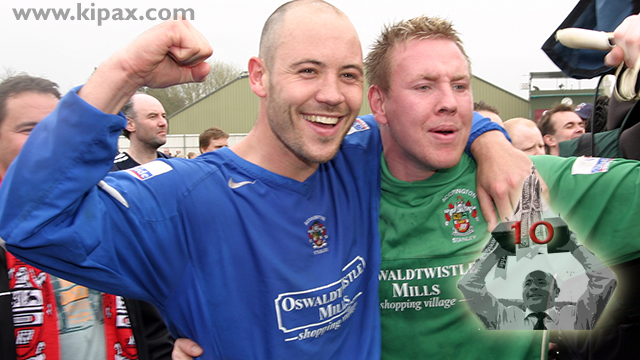 Paul Mullin admits the significance of his winning goal at Woking a decade ago was almost lost on him – but that it soon became clear that he’d made history.

The striker turned in Mark Boyd’s first half shot to open the scoring at Kingfield and the Reds hung on to win both the game and the Conference title.

In the process Mullin wrote another chapter in the club’s remarkable story, even though it took a little while to dawn on him.

“After I scored there was a split second where I thought about the celebration,” he remembered. “I almost didn’t celebrate. I ran off and it started to dawn on me that this could be a really important goal. I saw the pictures of me celebrating afterwards and I look like a mad man. 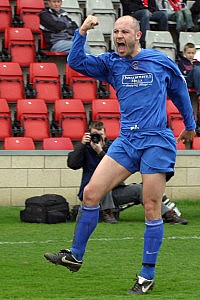 “I didn’t really over celebrate most of the goals in my career really. Coley always used to take the mickey about how little I did celebrate but it was pure relief really. That was my overriding memory of that day. The relief and the sheer physical exertion of it. We were dead on our feet towards the end of that game.

“I remember the goal. It was a Mark Boyd that was a bit of a daisy cutter. There wasn’t a cat in hell’s chance that it was going in, though Boydy will probably tell you different, but I just deflected it and the keeper had committed himself.

“I deflected it from somewhere on the edge of the box so I think the keeper really could’ve got up and caught it but he’d over committed himself and it went in.”

Mullin would go on to make a contribution in the other penalty area that almost extended the wait for promotion but was grateful to his goalkeeper for keeping the Reds in front.

“I gave away the penalty actually,” he laughed. “When I look back at my career I realise I used to chase back too much but I found myself in the penalty box trying to defend the cross and it was so blatant a hand ball I may as well have caught it. I didn’t even try to kid the ref. I put my hands on my head as if to say ‘what have I just done?’ It was probably the easiest decision the ref ever made.

“Robbie Elliot then pulled out a great save and then another after it was retaken. I was dead on my feet, physically and mentally gone, but thanks to those saves and the resolve of the lads we did just enough to get over the line.

“We were all hungry and wanted to play in the league. We knew about the history and how good the story was but immediately for the players it was about that chance to play in the Football League. A lot of those lads went on to have really good careers and are still having them now.”

The final whistle brought over 400 travelling Stanley supporters onto the field to join the players and staff in the celebrations.

The club that wouldn’t die had officially made it back to the Football League and the man who would go on to set the record number of appearances for the Reds was at the heart of it.

“It was just mental,” said Mullin. “There were people running onto the pitch from all angles. I have friends and family in the crowd and we’d taken a great following. I remember one guy with a Stanley tattoo on his head and I had to kiss his tattoo. It’s pretty sad that is my abiding memory of those celebrations but it was!

“There were people on the pitch trying to do interviews and celebrations and it was a really great day but I just remember being absolutely physically shot by it all.”

To mark a decade since the Conference title, tomorrow’s programme against Morecambe features special content, including interviews with promotion heroes Paul Mullin and Rob Elliot.

To relive the historic game at Woking visit theKipax gallery