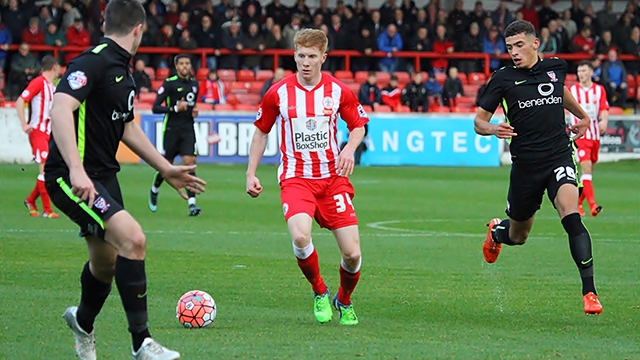 Brad Halliday expects the race for third place in League Two to go right down to the wire – and for Stanley to be in the picture come the end of the campaign.

The on loan Middlesbrough full back picked up the Man of the Match award in Saturday’s 1-1 draw with Cambridge United.

That result leaves the Reds fifth, with third placed Bristol Rovers and Plymouth Argyle in fourth on the same points total.

“It’s going to be a battle,” said Halliday. “We hope come May that it’s us in third place. At the minute we just have to perform as well as we can in every game. We believe we can do it. As players, staff, management and fans we just need to push forward together.

“Every home game is particularly an opportunity. The fans have been great and really helped us get results and hopefully they can continue doing that.”

John Coleman’s side came from a goal down to take a point against the U’s thanks to Tariqe Fosu’s first goal for the club.

Halliday thinks they showed their character to rally and come back.

“Towards the end we were a bit relieved because at least we’d gained a point and it was hard to come back from 1-0 down but I think we could have taken all three,” explained the 20-year-old. “The goal we conceded was a sloppy one and we have to iron out those mistakes in future.

“I think we started the first half quite lively and created a few good chances and pinned them back but then we took our foot off the gas a bit and let them come back into it. At 0-0 at half time it was a bit disappointing but we didn’t start the second half well and they took the early lead. We did well to get back in it.

“The gaffer was saying before the game that he had 16 players to pick from and could only select seven for the bench and that’s outside of the starting eleven. The management had tough decisions to make and decided to make the changes and Tariqe came on and got his goal so full credit to him.”