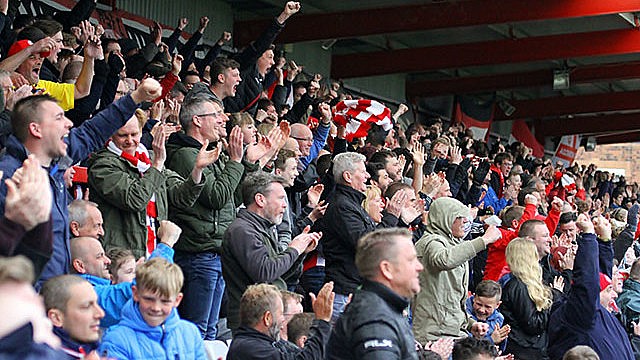 It will be a party time at a Fan Zone day at Accrington Stanley to mark the end of a successful season and hopefully celebrate promotion to League One – come and join us!

Stanley could clinch promotion to League One this weekend and, with what will be the final home game of the regular season against Stevenage on May 7th, it’s hoped there will be plenty to shout about.

The Official Accrington Stanley Supporters Club (OASSC) is working with the football club to organise a 12-hour festival of football, live music and fun on Saturday May 7th.

There is free entry to the Fan Zone event, which starts at noon in an 80ft by 30ft marquee on the Clayton End car park outside the Wham Stadium on Livingstone Road. Local band the Accy Rockers will play live from 1-30 to 2-15pm, Darren Woodhead will run the Accrington Stanley FC historic memorabilia stand, there will be a bar and soft drinks and free face painting for kids.

Compered by BBC Radio Lancashire’s Stephen Lowe, the Fan Zone event will run up to the 3pm kick-off against Stevenage, with fans urged to buy their tickets early as the match is expected to be a sellout.

After the match the fun continues in the Fan Zone, moving to the club’s Sports Bar at 7pm and from 9pm all the way till midnight continuing at The Crown, Accrington Stanley’s very own pub, in Whalley Road.