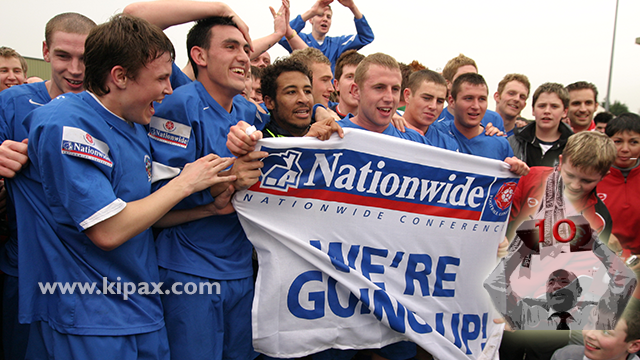 Rommy Boco was just 19 when he arrived at Accrington from France but it was a ‘bonne saison’ for him as he helped Stanley clinch promotion to the Football League.

Rommy, back at the Wham Stadium for a third spell, admitted he was struggling with the language and with the ‘banter’ of his team-mates in the 2005/6 campaign but it didn’t mar a memorable season for him.

Now 30, Boco played in that historic clash at Woking 10 years ago this week where Paul Mullin scored the winner to send Stanley back into the Football League, 44-years after they were forced to resign due to debts.

“I remember going to the hotel before the Woking game and we were all laughing and joking,” said Rommy.

“At this time I couldn’t understand too much of it but I remember the atmosphere was cool. We stayed in London, went to a local pitch and had a small training session. We were all laughing and joking about the fact we could be champions. It was good fun.

“We were just full of confidence. The lads were really relaxed, we knew we were winning games all the time and we all knew that we could do it.

“There were many games that season that we won where we’d come back from behind or won when we shouldn’t have and we were such a good team.

He admitted the English football culture was something of a shock to him.

“For me, to come from France to here at that time was a bit messy. I remember of lot of trips back after winning games and the lads used to be mental – jumping, dancing, music and singing on the coach. It was strange for me because it was new but I realised that it was more the English way to live football. Passion.

“In France we stayed in our corner, concentrated and moved on. Here it’s all the banter and everyone is laughing, making you sing and a lot of jokes. If something strange happened in the game you get reminded, if you got nutmegged, the lads laughed at you.

“It was my first year in England and it was a big thing to win the league first time round. I adapted myself to the English way and it was tough but I enjoyed it.”

And he admitted he is full of admiration for the players from that Conference-winning team – Rommy himself has played in League One as well as in China, India and Ireland.

“You see a lot of players who come here from big clubs and do well. Look at Rob Elliot. From here he went to be captain of Charlton and got a move to Newcastle. There are so many others who have got moves from being here.

“Anthony Barry and Andy Procter are here but I’m still in touch with Andrew Mangan, Gary Roberts, Danny Ventre and Paul Mullin. A lot of them really. I was with Gary Roberts at Portsmouth a few months ago and we always talked about that year because we were only kids and there was no money involved.

“You look back ten years and these lads have had careers in the Championship, they’ve got wives and kids but it was different then. At that time it was all banter.

“We didn’t think about many things other than football. Now it’s a different life. Football is a more serious business, you’re thinking about your next contract and that’s reality. At that time we didn’t think about contracts or anything. It was playing football and enjoying it.”

The official website will have memories of the 2006 promotion campaign from now until the anniversary of the Woking game on Friday.

To relive the historic game at Woking visit the Kipax gallery