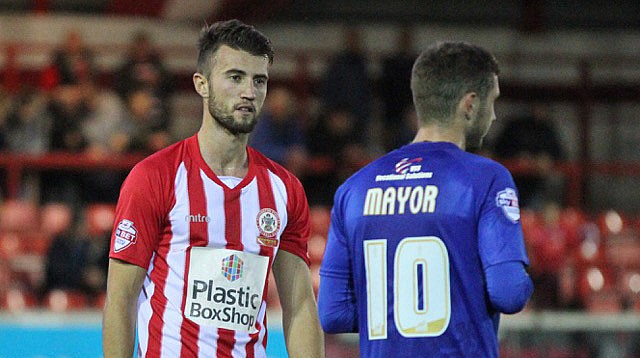 The Reds saw a Billy Kee goal ruled out by the half time whistle at Kingsmeadow and also had Ross Etheridge sent off for handling outside his area.

Wakefield made his first start since October as John Coleman’s team kept a clean sheet but couldn’t believe they hadn’t won the game.

“The atmosphere in the dressing room was a bit strange,” explained the former Doncaster man. “The lads were more upset than anything. Jimmy Bell asked why nobody was smiling but it was all to do with the way the first half ended. We thought we were the better side, we’re happy to have taken a point but we feel we should have had all three.

“I’ve never seen anything like that before. I’ve seen the whistle go with someone breaking on the halfway line but never with a player turning and shooting a few yards out inside the area. The referee blew the whistle as the ball was going into the net. I’ve never seen that.

“We don’t think Ross was outside the box (for the sending off) and he doesn’t think he was out of the box. Until we see otherwise we think he has done the right thing and made a good save. It was a shock to everyone to see the red card.

“It was massively important not to lose it with ten men. If we’d conceded that would’ve meant back to back defeats and going into Portsmouth on Tuesday worrying about a losing run.

“Now we’re going into it knowing that we can keen a clean sheet and with the attitude that we are capable of doing it again.”