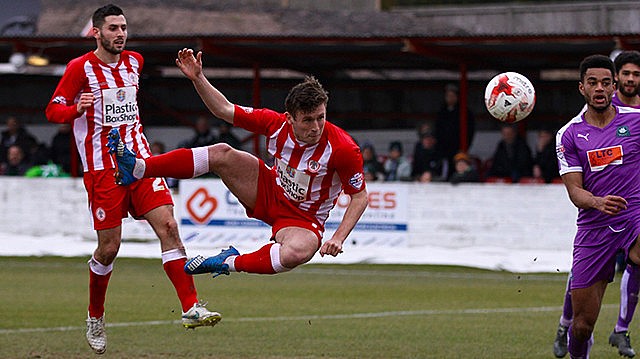 Shay McCartan hailed one of the most important goals of his career after helping Stanley beat promotion rivals Plymouth Argyle.

The substitute’s stoppage time header gave the Reds all three points against the third placed Pilgrims.

And it’s a moment the Northern Irishman will remember for some time.

“That’s one of the most important goals I’ve scored, hence the celebration,” he said. “It took about ten minutes to get the jersey off, it’s that tight! It was a great feeling to score. That goal and York a couple of years ago are the most important I’ve scored for different reasons. One was to stay up and hopefully the other will help us get promoted.

“It was an unbelievable end to the game. We had a tough game on Tuesday and didn’t perform to our usual standards so we knew that we had to be better. I felt we were undeservedly behind, we had more possession and we were unlucky not to get back in the game sooner.

“I had a chance just when I came on and was unlucky but after we got the penalty there was only one team going to win the game. Against the ten men we did well to get the second goal though.