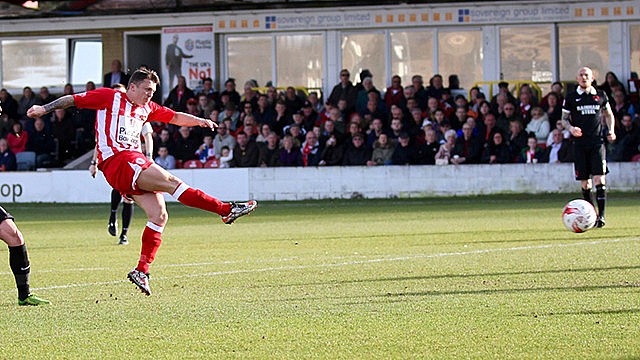 Scott Brown has scored two vital goals for Stanley – and the midfielder hopes he can get a couple more to take the Reds into the automatic promotion spots.

Brown, who came to the Wham Stadium in January after being released by Grimsby, fired home the winner against Oxford in February and then secured the three points with the only goal in the victory over fellow promotion chasers Leyton Orient yesterday.

It keeps fifth placed Stanley just one point behind third placed Bristol Rovers and the win proved vital as most of the teams in the top six also secured three points.

“I am made up to score,” said Brown. “I missed two really good chances against Dagenham last week so this was important.

“It was like the goal at Oxford, Sean (McConville) has whipped the ball in and it’s a great touch by Billy (Kee) again and it fell nicely for me.

“Because I had missed previous chances, I thought I had to get a good connection on it and it’s gone through the lad’s legs and I don’t think their goalie has seen it.

“That result is massive, every result with eight games to go is massive and we need to win every single game.

“We never go into a game thinking we will try and nick a point, we go in believing we are going to win and we showed it again on Friday. Sean (McConville) could have had a couple against Orient, Billy (Kee) was unbelievable, he is unplayable when he is like that, and I thought as a team we were  really good.

“The clean sheet was also important. The defence were quite comfortable. Leyton Orient have scored in their last 15 games and I didn’t think they really troubled us and Ross (Etheridge) has not had a save to make.

“We are doing well at the minute and we have to take it into Monday at Newport with the same performance and hopefully the same result.”

There is competition for places now with John Coleman adding loan signings Tariqe Fosu and Andy Little to his squad on Thursday.

“There are places to play for,” added Brown. “It’s a really good squad and anyone, even those who aren’t in the squad at the moment, can come in and do a job.

“I was thankful to get the shirt again and I thought I played a lot better than I had previously and hopefully this will build some confidence and I can show what I can really do.

“Newport will be a different game to Orient, every game is different, and we will have the weekend to recharge the batteries and go again on Monday.

“All we can do is concentrate on ourselves and if we keep performing and winning then we will give ourselves the best chance.”