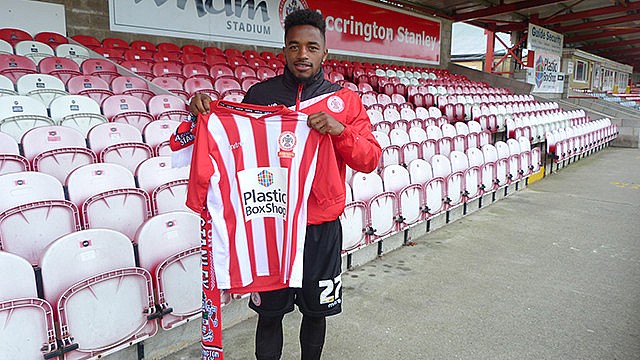 The 20-year-old has arrived on a deal until the end of the season following a similar spell at Fleetwood Town earlier this season.

The Stanley boss is pleased to have him in ahead of this afternoon’s 5pm deadline.

“Tariqe did well when he was at Fleetwood and he’s signed a new contract at Reading so they must think very highly of him,” explained Coleman. “He gives us something different and something that we haven’t got really so I’m looking forward to seeing him on the pitch.

“He’s very direct, quick and he has a few tricks up his sleeve. I think the fans will be quite pleased when they see him.”

Fosu hopes that his recent experience at Highbury will help him to hit the ground running at the Wham Stadium.

“I was at Fleetwood and got a few games in League One and this is another good loan move with the team fifth at the moment and from the time I’ve been here the lads seem to be a pretty good bunch,” he added. “They’ve made me feel more than welcome so hopefully I can get a few games and help them to get promoted.”

Tariqe’s move to Stanley is subject to Football League ratification. He will take the squad number 30 with the Reds.