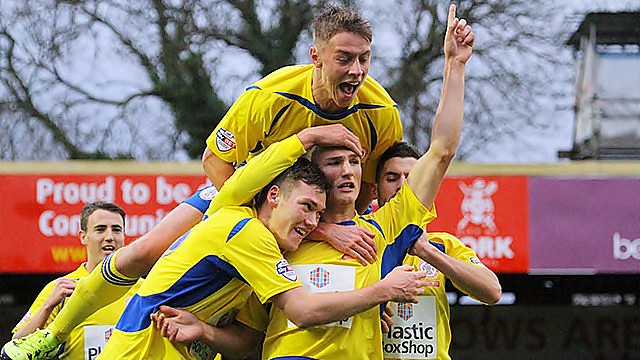 Matty Pearson wants Stanley to show fighting spirit against Dagenham and Redbridge on Saturday in order to keep pace with the League Two automatic promotion places.

The Reds drew 1-1 with Wycombe last night to leave the gap to the top three at four points.

Now they make the trip south to face a Daggers side rooted to the bottom of the division but the defender expects that to make things all the harder.

“They’re battling to retain their Football League status and that makes it a big game and means we’ll have to battle too,” he explained. “They’re not just going to roll over. We have got to be really on it and keep going. We have to let our class show and hopefully that means we’ll win.

“Neither team is in no man’s land so we need the points and they need the points. They probably need them more than us and that’s why they’ll be fighting for every second of that game. We have to prove we want the points more.

“The draw with Wycombe felt like two points dropped, especially having gone in front. We feel we should have won the game but in the end it’s a good point if we can pick up all three on Saturday.

“The week when we had Yeovil and Wimbledon away and got one point from the two games it wasn’t great. It felt like we were travelling round the world.”

It’s the end of a gruelling run for the Reds that has seen them play eleven times since the beginning of February.

But Pearson remains confident that the squad is in good shape to return to winning ways at Victoria Road.

“There are no games in hand now, it’s all square and we have a ten game run in to try to win ourselves promotion.

“We’ve lost big players to injury like Terry Gornell, Dean Winnard and Josh Windass and now we have Matt Crooks out but it’s been good to see lads come in and do well.

“I always have faith in the lads that are coming in. Scotty Brown is a great example. He’s been brilliant since coming into the side and it’s the same for other lads who have been called upon to come in. Brayden Shaw, Rommy Boco. All these lads are good players.”