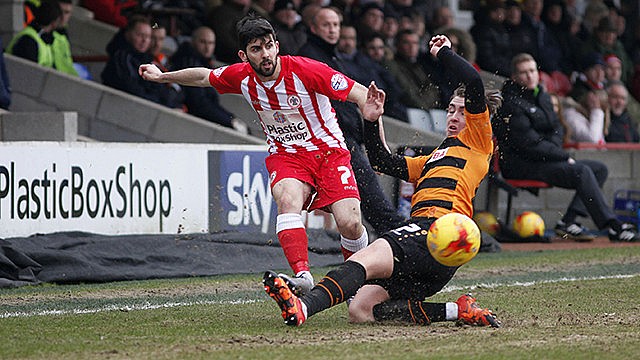 Stanley midfielder Piero Mingoia is backing his team mates to make amends for the midweek defeat at Yeovil against AFC Wimbledon.

The Reds lost for the first time in six games at Huish Park but have swiftly turned their attention to a return to winning ways on Saturday.

Mingoia is keen to ensure that the last result was just a one off.

“It’s crucial we bounce back,” said the 24-year-old. “Since I’ve been working with the gaffer and Jimmy they’ve always emphasised that when you lose a game one defeat doesn’t become two and two definitely doesn’t become three. We lost on Tuesday and it’s our job to make sure that doesn’t happen again on Saturday.

“When a run ends you just have to look at getting on another run. In this league four or five good results in a row can really make a difference. We have to go to Wimbledon, get a positive result and straight away look to the following Tuesday.”

The Dons are one of the few sides to leave the Wham Stadium with three points this season after a topsy turvy 4-3 victory in October from a game Stanley had led 2-0 and 3-2.

Mingoia thinks that game could be a slight factor this weekend at Kingsmeadow.

“It should be in your mind a little bit,” he explained. “It’s a different game now and the situation is different in terms of the league table but as a professional you want to put things right. Hopefully we can use that feeling positively to get that result and forget that result at our place.”

It’s a second long away trip in a week for John Coleman’s team, who will have chalked up over 1000 miles by the end of the weekend.

But that doesn’t mean they won’t be at their best against their eighth placed hosts.

“It’s a little bit tiring as you’re on the coach for hours and it’s a bit unlucky to have Yeovil on the Tuesday and then Wimbledon on the Saturday but we deal with it and do things right,” added Mingoia.

“We stayed in a hotel on Tuesday night to recover properly and we’ll stay on Friday night to prepare so we’ll be eating well, preparing and being ready for three o clock.

“We’ve had good results and very good performances where we possibly haven’t had the result we deserved away from home this season so we’re confident we can perform again and take the three points on Saturday.”