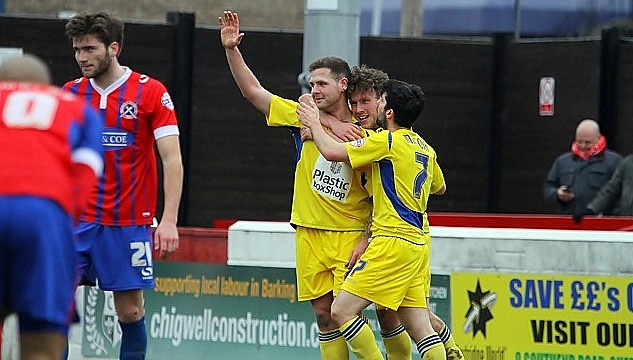 We deserved our luck: Kee

Billy Kee felt Accrington Stanley got that bit of luck they deserved in the 1-0 victory at Dagenham and Redbridge on Saturday.

The striker scored his 16th goal of the season in the 83rd minute to boost Stanley’s automatic promotion hopes – although it was something of a scuffed effort.

“It was a great ball in by Mark Hughes and there was no one around me,” said Kee of his late winner.

“I have tried to run at their defence and Shay (McCartan) has made a good run and he was in a better shooting position than me.

“I played it to him but the pitch was bobbly and the ball has come back and it’s come off my heel as I have gone to shoot, it’s gone over their lad, and I have hit it in the ground and it’s gone in.

“I will take that all day – it’s what it’s all about, coming away from home and getting a scrappy win.”

Kee also felt Stanley got some luck in the first half as, despite Sean McConville hitting the post, veteran striker Jamie Cureton missed an open goal for the relegation-threatened Daggers which would have given them the lead.

“Jamie is a great lad and has scored a lot of goals in his career,” continued Kee. “You can see the age he is now and he is still getting chances like that.

“It has bobbled up for him and he has put it over but maybe that’s the bit of luck we need sometimes. We haven’t had that luck lately. Brad Halliday should have got a penalty for us in the first half then Scotty (Brown) has had a great chance in the second half to put us 1-0 up but that happens in these games.

“At half-time, the gaffer went nuts and deservedly so as I don’t think we were as good as we should have been in the first half.

“But, at the end of the day, you will take a 1-0 win anywhere, home or away, especially at this stage of the season.”