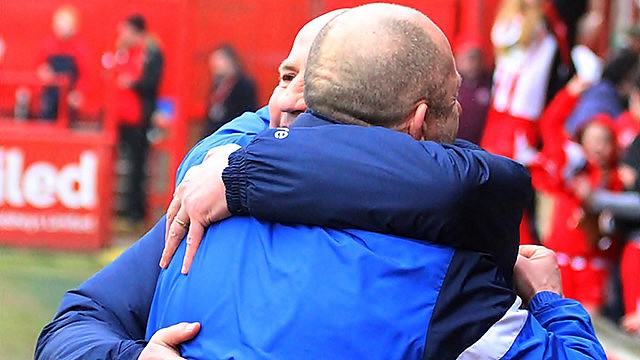 John Coleman praised goalscorer Billy Kee as Stanley moved to within one point of third spot.

Kee fired home his 16th goal of the season in the 83rd minute at bottom club Dagenham and Redbridge.

There was also a welcome clean sheet for the Reds who remain in fifth spot in League Two.

“We kept plugging away and it was fitting Billy Kee scored the winner as he was fantastic today,” said Coleman.

“He shows dogged determination which sets him apart which is why I think he is the best centre forward in League Two.

“It was a scrappy goal but, as Billy will tell you, there is no such thing as a bad goal and he will get you 20 goals a season and it’s crucial we have him with the way we play.

“They missed a great chance through Jamie Cureton but we defended well in the second half and we were the ones asking the questions. You have to keep plugging away and hope it will be your day and today it was.

“That’s seven points out of the last three games and if you said we would keep doing that between now and the end of the season, I would bite your hand off.

“There are still a number of teams going for automatic promotion and for the play-offs and teams will slip up, including us, and we need to keep ourselves in the mix come May.”