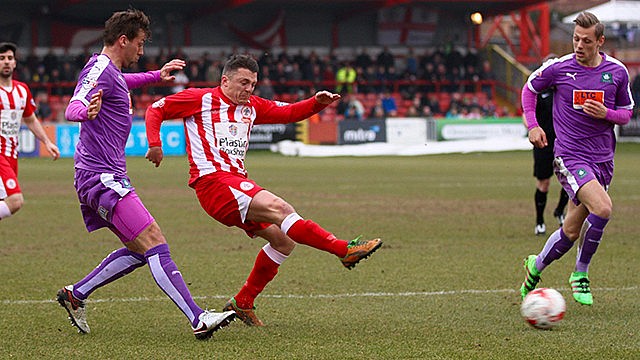 Scott Brown feels Stanley have the strength in depth in the squad to stay in promotion contention all the way to the end of the season.

The Reds are fifth in League Two ahead of tomorrow night’s home game with eighth placed Wycombe Wanderers.

Despite a number of established first team players being ruled out by injury, Brown believes John Coleman’s team can still compete at the top end of the table.

“The gaffer and Jimmy have instilled it into the players from day one that they are good enough to get promoted out of this league,” said the former Bristol City and York midfielder. “In the short time I’ve been here I’ve seen that from the likes of Seamus Conneely, Matt Crooks, Billy Kee… every player really. The lads who have stepped in like Mark Hughes have done superbly. It’s a great squad to be part of and I hope we can finish the job and get promoted.

“On a personal level I’m really happy to be part of such a good squad. If I’m needed to step in between now and the end of the season then I’m sure I’ll be ready.”

Brown could come into the side for the injured Matt Crooks after replacing him in the first half of the weekend win over Plymouth.

He believes that victory, with Shay McCartan netting a last minute goal, shows the determination in the group to stay in the hunt for automatic promotion.

“The gaffer and Jimmy are winners and that’s instilled into the lads,” he continued. “It’s not just individuals, it’s a team performance. Everyone is working for each other from the first minute to the last and it’s such a good squad to be part of.

“I think in football you just have to be first. First to stop goals, first to score them and first to create them. I think we showed that on Saturday and deserved the win.

“If we win (tomorrow) and cut the gap to two points then one of the teams above us only has to slip up once and we’re back in it. I think it’s still in our hands and if we can play the way the management want us to play I think we’ll have enough to stay there.”