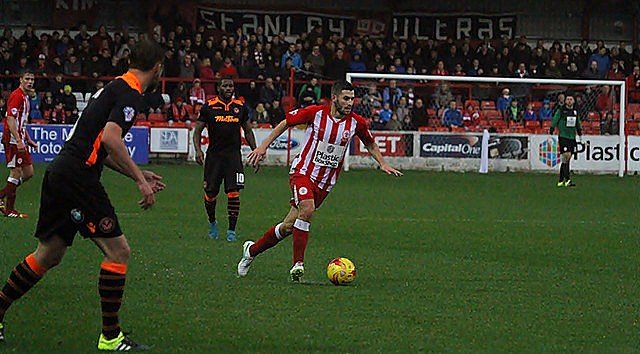 Seamus Conneely is the latest player to commit his future to Stanley, putting pen to paper on a new long term deal with the club.

The midfielder has signed a contract which takes him through until the summer of 2018, following on from fellow regulars Matty Pearson and Sean McConville.

The Irishman has started every League Two game so far this season and had no hesitation in extending his stay in East Lancashire.

“I’m very pleased to get this sorted early and I know the lads who have already signed are too,” said the 27-year-old. “It puts a core group of players together for the next few years and allows the manager to have something to build something around and hopefully be successful with.

“We’ve got ourselves into a good position just over half way through the season and there are still lots of games to go and we’re confident we can make it a successful season.”

“Seamus is a really good player,” added manager John Coleman. “He impressed me at Sligo, he was one of the few players I wanted to bring over from there and he’s one I wanted to tie down. We have to start looking at next season and not get into a situation that we’ve been in previously.

“It has always made me laugh when people ask why we haven’t tied players down to longer contracts. It’s difficult to get players to commit themselves and financially it’s been difficult in the past.

“We want to try to get more of the lads signed up. We’ve got a good squad here and a couple will leave at the end of the season with Josh and Crooksy going but we have a lot of players who have done really well and we want to keep this group together.”