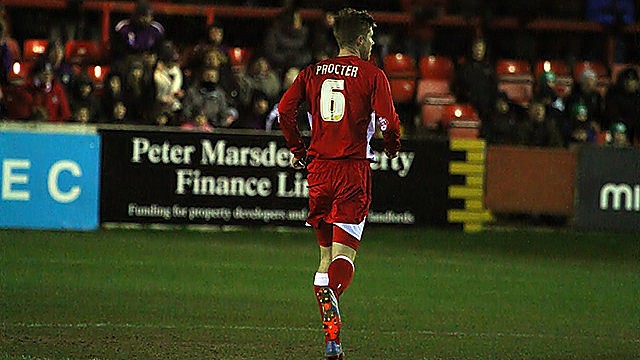 Proc glad to be back

Andy Procter feels good after his first league game for almost a year – and is now targetting keeping his place in the side for Saturday’s huge trip to Oxford United.

The midfielder made his first start since March last year in Tuesday’s draw with Carlisle United, notching up his 443rd appearance for the Reds in the process.

And the 32-year-old was happy with how he felt on Wednesday morning.

“I felt surprisingly good to be honest,” he explained. “I might feel it more in training today but I made sure I looked after myself and got on the foam roller and in the pool. I don’t know if it’s just adrenaline that got me through but fortunately I felt pretty fit during the game and okay afterwards.

“I think Carlisle are a good side. I think they’ll be there or thereabouts because they’re solid throughout the spine of the team with lads like Luke Joyce and Jason Kennedy and a couple of good goalscorers up front. I think them scoring after going down to ten men suited them because they could sit in and soak up pressure and we had to force and equaliser. Once we did that I felt there was only one winner but a point could be invaluable come the end of the season.”

With Matt Crooks, Shay McCartan and Adam Buxton all suspended for the trip to the Kassam Stadium Procter now wants to keep his name in the starting eleven.

He thinks the clash with the third placed U’s could be pivotal for Stanley who sit fourth.

“I don’t think we can make any bones about it, I think it’s the biggest game of our season so far,” he said. “We have a game in hand on them still and if we go there and win it closes the gap further still. When we played them at home I felt they were one of the best teams we’d played so we’re going there under no illusions that they’ll roll over. I think they are one of the best teams in this league but on our day so are we. We believe we can match anyone.

“Hopefully I’ve done enough to keep my place for Saturday but that’s entirely down to the gaffer. I’ll get right behind the lads regardless though, even if he decides not to keep me in there.”