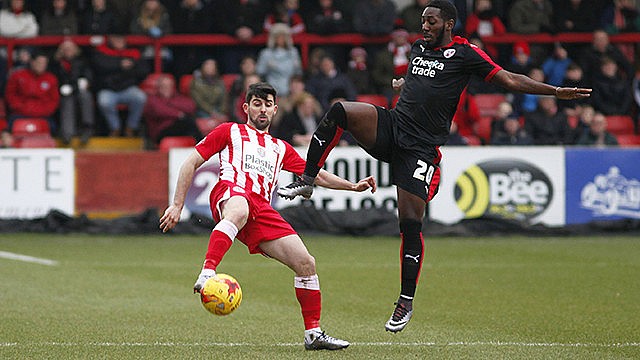 Piero Mingoia is keen for Carlisle United to see another side of Stanley when the teams meet at the Wham Stadium tomorrow evening.

It’s the second game between the Reds and the Cumbrians in ten days, with Keith Curle’s side running out 2-0 victors at Brunton Park.

Now Mingoia, who scored the final goal in Saturday’s 4-1 win over Crawley, wants to make amends.

“I think we let ourselves down up there,” said the midfielder. “We prepared really well and had a great win against Bristol Rovers so it was all set up for us to go up there and get a big win but it didn’t happen for us. The way we played was a bigger disappointment than the result. You lose games, that happens, but when you’re not at it it really hurts. We want to put it right and get three points.

“When they beat us they cut the gap to us but with them losing and us winning at the weekend that gap is back up again. Hopefully this time around we can get the win and extend that gap rather than them cutting it again.”

If selected, former Stanley skipper Luke Joyce will play against the club he turned out for more than 200 times for his new employers.

Ex-colleague Mingoia hopes he gets a warm welcome but nothing else.

“It’s going to be strange but that’s football,” he continued. “You play against loads of mates during the course of the season and Joycey is a good friend and a good player. We know what he’s capable of and I’ve wished him well for the season – just not tomorrow night!

“I hope he gets a good reception. He deserves it. He was a good captain for me for two years but hopefully we can take the points.