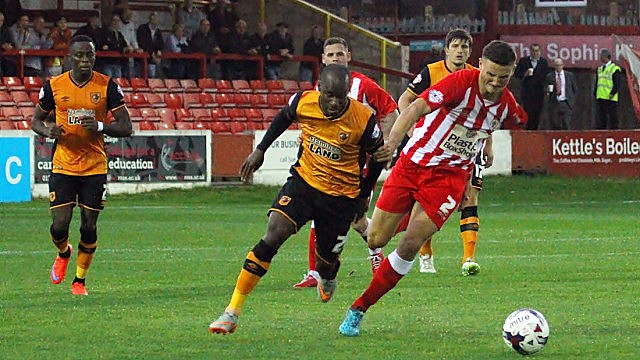 Matty Pearson thinks his goal against Crawley was the best of his career to date and was delighted to have made a crucial contribution to the win.

The defender netted his third of the season at a crucial time to put the Reds 2-1 in front as they came back from a goal down against the Red Devils.

He found himself in the wrong half of the pitch and was more than happy to take advantage.

“I don’t know what I was doing up there if I’m honest,” laughed the 22-year-old. “The ball broke as I was coming back. I went for the flick on and it went to Billy (Kee) he scrambled and it fell to me, I went for a tackle with the defender and somehow ended up one on one.

“I think I’ve done well to put it in from there. I’d say that’s my best ever goal. I’m just happy it went in and that we got the win. It’s put us right back in the mix.”

Pearson’s strike came ten minutes after both sides were reduced to ten men at the Wham Stadium, with Shay McCartan and Simon Walton seeing red.

The game seemed to open up after that and Pearson feels Stanley displayed the quality that has seen them in promotion contention this season to run out 4-1 winners, with Seamus Conneely and Piero Mingoia adding late goals.

“Later in the game we showed what we are capable of,” he said. “When Sean (McConville) and Piero get that much space out wide and Bucko and Brad overlap teams can’t cope. We capitalised on that and ended up winning the game comfortably.”