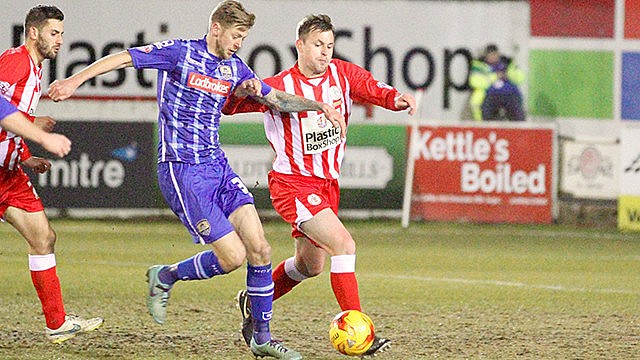 The Reds had been 3-0 up but conceded twice to make it a nervy finish at the Wham Stadium.

Manager John Coleman struggled to contain his anger in his post match interview and Hughes confirmed it was a similar story with the players.

“I told the lads that I’d love to see what the gaffer is like when we get beat,” said the defender, who made his first appearance since returning to the club in the January transfer window.

“It might be world war three! He has a point though. It’s so frustrating to be 3-0 up and end up hanging on. If we’d lost we should’ve been shot. We should’ve been more ruthless in both boxes because that’s how the best teams are.

“It’s a learning curve. We’re a young team and hopefully we can learn in the right way, learn those lessons and keep winning, starting on Saturday.”

Hughes thinks keeping the winning habit going is important, even if there remains plenty to improve on.

“It’s another three points on the board,” he added. “You look at the goal difference and as the manager said after the game it’s stupid to concede two goals from 3-0 up but three points is what it’s all about and a lot of teams would love them at the moment. The lads in the dressing room will take it in their stride and get better from the experience.”