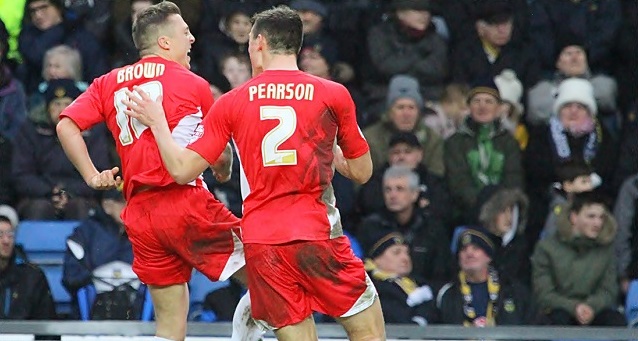 Scott Brown said there was no better feeling than scoring an 88th minute winner for 10-man Stanley at promotion rivals Oxford.

Brown, 30, only signed for the Reds in January after suffering an injury last season and struggling to make an impact in Grimsby’s side in this campaign.

He said coming to the Wham Stadium to link up with John Coleman and Jimmy Bell, who he played under at Southport, has given him a new lease of life and the last gasp winner showed that, especially as it was on his full Reds debut.

“As soon as I hit it I knew it was going in. It was a great ball by Billy (Kee) and the keeper has got a touch to it but I knew it was in. Everything just fell perfect.

“I didn’t get on the ball as much as I would have liked against Oxford but it was my first 90 minutes for a while but, by the end, it had gone to plan.”

Brown knows there is a big competition for places, especially with the likes of Matt Crooks now returning from suspension, but he is happy to battle it out.

“There is a great togetherness here. The gaffer trusts all the players. It was Procky’s turn on Saturday and it was mine at Oxford but there will be opportunities for all of us between now and the end of the season with the large number of games we have.”

The win closed the gap to third placed Oxford to three points with fourth placed Stanley having two games in hand on United.

“We believe we can go up automatically,” said Brown. “I haven’t been here a long time but you can see the standard of the lads. There are top, top players here and I just hope I can play my part between now and the end of the season.

“Saturday was a great day for Accrington though, it’s three points and we are pushing Oxford all the way now.”