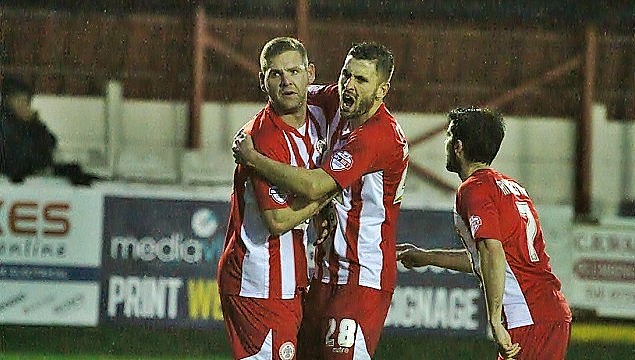 Accrington Stanley’s ambition convinced Seamus Conneely to sign a new contract at the club which will keep him at the Wham Stadium until 2018.

The 27-year-old signed a new deal this week and is aiming to secure a place in League One for himself and Stanley come May.

The midfielder follows in the footsteps of Matty Pearson and Sean McConville who have signed new long term contracts with the Reds.

“I’ve heard that it’s unusual for the club to hand out contracts this long but it says a lot about the ambition of the club now,” said the Stanley captain.

“They’re looking to the future and it’s always nice to be wanted and feel valued. I was very pleased when the gaffer approached saying he’d like me to stay. I was happy to sign. I’ve been here about a year now and I’ve thoroughly enjoyed it. The team’s been successful and long may that continue.”

Conneely admitted it did take him a while to settle in at Stanley after arriving in January 2015 following two seasons as Sligo Rovers, where he first linked up with John Coleman and Jimmy Bell.

“Having not had a pre-season I knew it would be tough when I first came over and I’d take a few months to adjust. I got a good pre-season in the summer and hit the ground running this season. The team has been superb and I’m really enjoying being part of this side.

And he is proud to be the club’s current captain and hoping to lead the Reds to a top three spot.

“Being captain certainly gives you a boost of confidence when you’re leading a good team out onto the pitch. It makes you feel a few inches taller.

“The top three is attainable. If we win our games in hand we’ll be level with Oxford in third place so it has to be the target. The gaffer has told us all season that the top three is the target and we believe that we can do it.

“The win over Bristol Rovers at the weekend was a massive one for us and we need to capitalise on that this weekend against Carlisle.  I haven’t been there myself but the lads tell me it’s a very tough place to go to. We’ve been in good form away from home, probably had our best performances on the road and so we’re going there full of confidence.

“If we could beat Carlisle and pull a few points further away from them then we’ll be in a very strong position.”