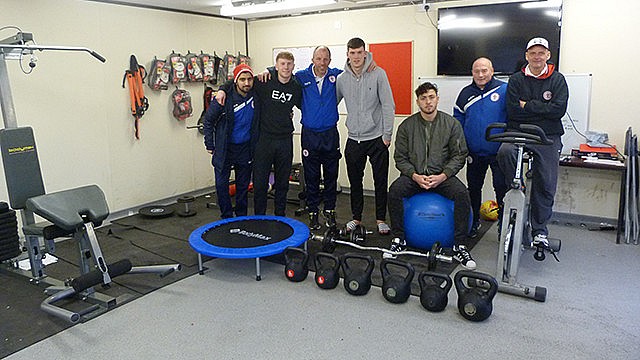 Stanley’s players can now maintain top levels of fitness as they push for promotion to League One thanks to a donation from the official supporters’ club.

£1000 raised by fans has paid for equipment for the gym at the Wham Stadium.

That means first team and youth team players can now use on site facilities that previously weren’t available to them.

“This will be very beneficial to the players,” said assistant manager Jimmy Bell. “They’ll be able to do pre-hab and rehab with the physio and do gym work and core work in the mornings before training.

“The owner has been kind enough to get us the building and now this money from the supporters club has helped us to get some of the things we need. We still need some other stuff but this is a fantastic start.

“This benefits everyone at the club; first team, youth team and staff. A big thanks to the supporters’ club for their donation and hopefully they will see the benefits on the pitch.”

“The OASSC have donated £1000 towards the equipment in the fitness room/classroom,” explained supporters’ club Chairman Nick Westwell.  “It’s great we can support this project which will be utilised by all playing members of the club.”