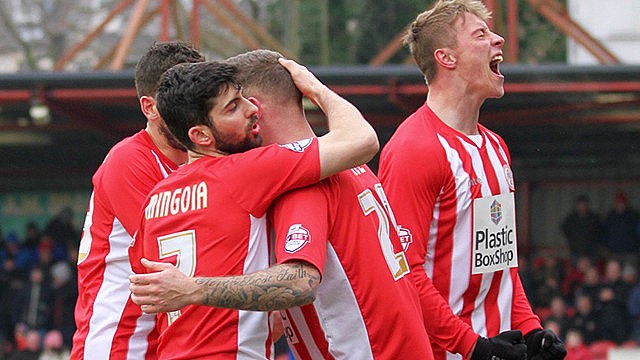 Tom Davies wants Stanley’s players to take their frustrations at failing to beat Barnet and use them to beat Yeovil tomorrow.

The Reds were 2-0 against the ten man Bees at the Wham Stadium on Saturday and ended up drawing 2-2.

Now attention turns to the trip to Huish Park but Davies acknowledges that there’s a determination in the dressing room to make amends.

“It felt like a defeat in the changing room and we’re still hurting now to be honest,” said the centre back.

“At 2-0 up we felt the game was won and that was probably our downfall. We let them back in with a sloppy couple of goals and considering how we played for 80-90 minutes the game should have been wrapped up.

“Even though we’re hurting we’ve got to put it behind us and hopefully get a result tomorrow.”

The Reds have kept just one clean sheet in their last 17 games despite being in the kind of form that has seen them climb to fourth in the League Two table.

Now Davies is keen for the team as a whole to work on the defensive side of their game.

“It’s not nice to be conceding a lot of goals and it’s something we need to work on because you’re not going to win as many games as you should do if you’re letting a stupid amount of goals in,” he explained.

“Jimmy and the gaffer have started to do a bit more defensive work with us and as a defender myself I want to be involved in a back five that’s keeping clean sheets so hopefully we’ll see that in the coming weeks.

“We have to have the mentality that we need to pick three points up to get us where we want to be.

“It’s less about them and more about us really. If we concentrate on what we can do then I’ve got no doubt that we can beat Yeovil. I’d snap your hand off for a solid 1-0 win.”