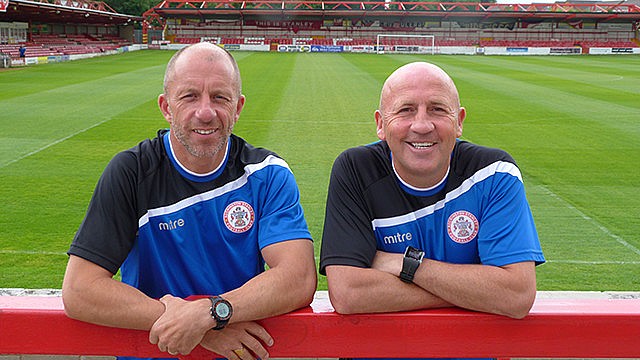 John Coleman is looking to reach a major milestone with a victory against Carlisle United this evening.

Stanley sit sixth in League Two ahead of kick off with 48 points on the board.

A win against the Cumbrians would see them break the traditionally stated safety mark of 50.

“It’d be a smashing achievement for the players and that’s our aim,” revealed the Stanley manager. “You have your little mini goals and mine have always been 30 points, then 50 points, then 70 points. The quicker you can get past the 50 the quicker you can set about trying to assault the 70. If you can get 74 or 75 you’re more or less guaranteed play-offs and that’s what we’re aiming to do first and foremost and then maybe have a go at the top three.

“There’s a lot of football still to be played and you can get carried away if you aren’t careful and lose sight of what got you successful in the first place. Our success has been purely down to hard work. I think the ability was evident from the start of pre-season but the players are getting the rewards from the hard work they are putting in.

“There are lots of teams all in with a chance of the play-offs and we’re just one of the pack. You have to strive to keep your place and we want to cement that place. We can go nine points ahead of Carlisle tomorrow or three. We’re hoping to get it to nine.

“Carlisle’s a big club, they have good resources and are really well supported. They’ve had a couple of good cup runs this season so they could have some funds to strengthen and get better too.”

The teams last met just ten days ago with Carlisle 2-0 winners at Brunton Park and Coleman is keen to make up for that disappointment this time round.

“From a personal point of view I’m pleased to be playing Carlisle again so quickly,” he said. “I’m keen to show Carlisle a different Accrington to the side that turned up at Brunton Park.

“It was a poor performance but even then we could still have got something out of the game. We’ve set a benchmark for ourselves with our levels of performance and commitment and we shouldn’t fall below that. You might do that with performances but you certainly shouldn’t with your commitment, endeavour and effort. The times are few and far between where we’ve let ourselves down on that score.”