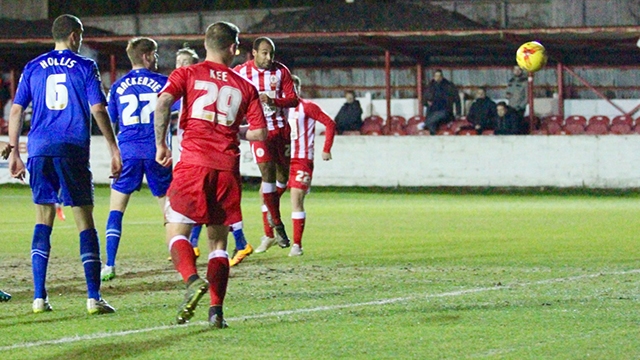 John Coleman has praised double goal hero Rommy Boco – and now has decisions to make about his team for tomorrow’s home clash with Barnet.

Benin international Boco scored twice – his first goals on his third return to the Wham Stadium – in the 3-2 win over Notts County midweek.

However Shay McCartan, who won the PFA Fans Player of the Month for January with the award presented before the Barnet game, is back in contention after a return from suspension.

Josh Windass and Terry Gornell will also be pressing for a starting place in the Stanley frontline soon and that will give Coleman happy selection headaches.

“We knew what we were getting when Rommy re-signed,” said Coleman. “He showed on Tuesday what an excellent player he is and he deserved his Man of the Match award.

“It’s great to see him score. I don’t think he gets many with his head but he has a great leap on him and the only disappointment on Tuesday was that he didn’t get a hat-trick.

“Rommy’s personality is infectious, he has a big appetite for football and for life and you need players like that.

“He has a great understanding of the practicalities of the game and his role at the club.”

Coleman admitted he has decisions to make.

“Over the next couple of weeks, it will be like signing new players. Shay and Tom (Davies) return after suspension for tomorrow while Josh, Terry and Dean Winnard will be pushing for places as well.

“Joe Wright is having treatment at Huddersfield for his ankle although this weekend will be too soon.

“Nearly half the team have been out over the last few weeks and it will be good to have them back and we will need them all for the run-in.”