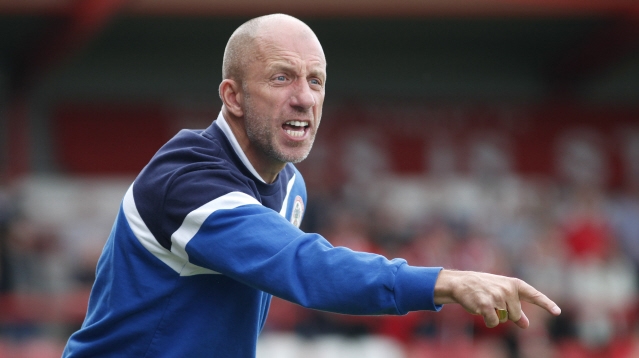 Jimmy Bell is expecting an entertaining clash at Carlisle as Accrington Stanley look to cement their place in the play-off spots.

The Reds travel to Brunton Park today where they will come up against former Stanley captain Luke Joyce.

Stanley are in sixth place, six points ahead of 13th placed Carlisle with both having played the same number of games – 25 – and playing catch-up on the rest of League Two.

“Carlisle is a really difficult game,” said assistant boss Bell. “They are not on the best of runs at present but they will be eager to put that right.

“They are a very good team and are one of those teams I have seen quite a lot of this season and they will be keen to return to winning ways.

“It is a massive game for us and I cannot emphasis this enough. Carlisle have done magnificently to get the ground up to standard and they deserve every credit for that.

“We are looking forward to going there and showing what we can do. Carlisle play entertaining football so it should be a good game.”

The Reds have been boosted by the news that Seamus Conneely has signed a new contract until 2018 and they also have Mark Hughes, Scott Brown and Rommy Boco, all signed in January, eager to make their Stanley debuts.

“We have strength in depth now and we will need everyone between now and the end of the season if we are to push on,” added Bell.

“Our philosophy has been to get young, hungry lads in who show no fear but there will be pressure moments between now and the end of the season and that’s where you will need your Scott Brown’s, Andy Procter’s and Mark Hughes’s who have been in the situation before and can speak to the younger lads.”

Josh Windass will have a double hernia operation shortly and will be back in contention for a first team spot at the beginning of March. Dean Winnard is out following a chest operation while Terry Gornell is battling a knock.