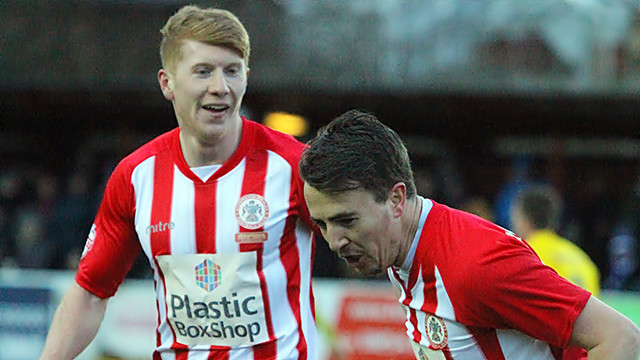 Brad Halliday doesn’t believe the team for tonight’s game with Notts County could be described as weakened despite a number of regulars being ruled out.

Injuries and suspensions mean manager John Coleman has fewer options than usual to call upon for the clash with the Magpies at the Wham Stadium.

But on loan Middlesbrough full back Halliday thinks there will still be a lot of quality on show from the men in red.

“There’s strength in depth in our squad,” he said. “The gaffer brought a few players in during the January window and they are good players who have easily fit into our team. We’ve not only got a good bench but we have lads in the stand dying to be involved who are just as good.

“It’s hard to keep my shirt and I’m sure it’s hard for the other lads to keep theirs. We’ve just got to keep mucking in as a team and hopefully get where we want to be come the end of the season.

“The lads who come into the side show how good the team is. I came in as a right back and I know that’s where Liam Wakefield had been playing. It’s hard keeping him out of the team. He’s training well day in and day out and he’s properly pushing for a starting place.

“It’s good to know that if I got injured or didn’t play for whatever reason there’s a player of his quality to come in. These lads can come into the side without any hesitation and do a great job.

“That’s a good thing but it’s also a challenge because it’s a real task to stay in the Accrington side.”