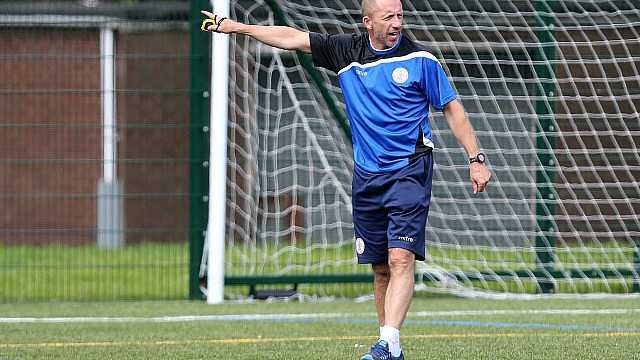 Bell: Promotion push is on

Jimmy Bell is delighted to get through January with the Stanley squad intact – and now it’s the big push for promotion.

Despite interest in Billy Kee and Shay McCartan, the Reds turned down the offers and have boosted their squad with the additions of Scott Brown, Mark Hughes and Rommy Boco.

Prior to Andy Holt’s takeover of the Reds in October, Stanley had been a selling club but assistant boss Bell says this is no longer the case and now the full focus is on beating Carlisle on Saturday and chasing the top three.

“Every year Accrington as a club are expected to struggle but we have proved this season we are a club going in the right direction,” said Bell.

“The new owner has come in and given us fantastic backing, we are turning down offers for players and we would have been foolish to consider offers for Billy or Shay as that would send the wrong signals.

“There is a big future for Accrington. We are at the top end of League Two, if not League One. Our ultimate aim is to finish in the top three.

“We have strengthened and that’s what a lot of clubs who get promoted have to do. We have got a lot of games coming up and we now have strength in depth and cover in every position.

“Scott is a great addition, Mark needs a couple of weeks training under his belt and then he will push Tom Davies, who himself is battling to get in the team, and Rommy Boco is a fans favourite and can play in a lot of positions.

“We told the players from day one what our ambitions are and in previous seasons, that’s been taken away from us due to finances or infrastructure or such like. Now we are in a fantastic position and we need to push on.

“We believe we can catch the top three especially as Plymouth are coming here which will be a massive game and then we have to go to Oxford, which we are looking forward to. But first and foremost it’s Carlisle and it’s massive and I can’t emphasise that enough.”