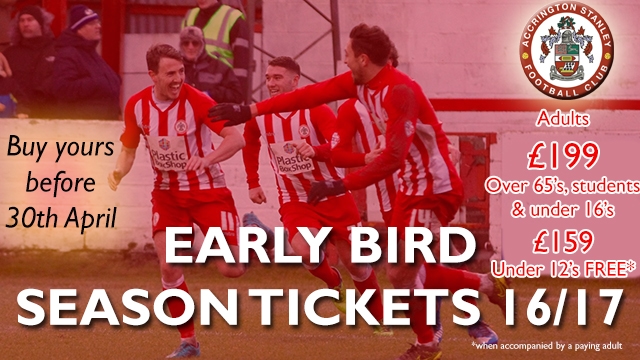 Watching football at the Wham Stadium will continue to cost less than £9 a game for adults in 2016/17 – even if Stanley are promoted to League One.

Season ticket prices for the next campaign have been announced, with an adult paying less than £200 for an early bird season ticket if purchased before 30th April 2016.

Early bird tickets, purchased from 15th February until 30th April, will be £199 for adults which works out at just £8.65 a game while it’s £159 for Over 65s, students and Under 16s, which is just £6.91 a game – a bargain considering the entertaining football the Reds have served up this season in their push for promotion.

The club is keen to bring through a new generation of supporters, and as a result an under 12’s season ticket is FREE if bought alongside an adult or over 65.

And if you can’t commit to come to every game, there’s now a chance to secure reduced admission prices and a host of Season 2016/17 special offers by buying an Accrington Stanley Loyalty Membership Card at a one-off price of £20. The loyalty card automatically reduces walk on match-day prices to £15 for adults and £10 for over 65s, students and Under 16s and U12 Members receive free entry with a paying adult.

Managing Director David Burgess said: “At under £9 a game for an adult season ticket holder to watch what we hope will be League One football next season, it’s a chance not to miss.

“The football this season has been entertaining – with the Reds scoring at home in every home league game – so you are guaranteed goals!

“We are excited about our Accrington Stanley Loyalty Membership Card and hope it’s a big success.

“As well as match-day discounts, there will be reduced prices on official merchandise and other benefits to becoming a member.”

2016/17 season ticket and Loyalty Membership forms will be available from Monday 15th February from the Stanley Store, supporters club shop in Accrington market and online.

Loyalty Members pay a one off fee of £20