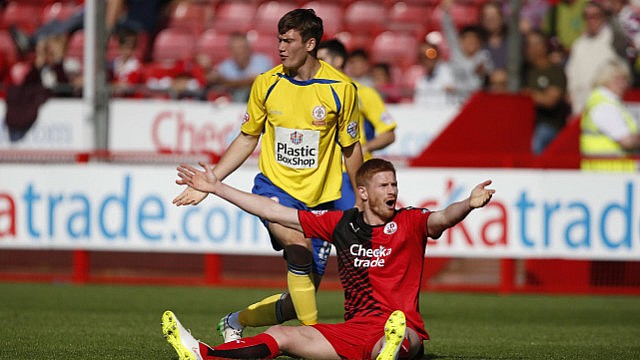 Joe Wright has extended his contract at Stanley until the end of the season.

The Huddersfield loan defender’s initial contract was up after Saturday’s win over Mansfield and he has now put pen to paper on a deal which will keep him at the Wham Stadium until the end of the campaign.

The 20-year-old first came to the Reds from the Terriers in pre-season and said: “I am buzzing. It’s been really good and the gaffer and Jimmy (Bell) have been great with me in giving me the opportunity.

“The lads have helped me settle in and it’s positive for me being around the first team dressing room and playing for points.

“I have been here since pre-season and played in pre-season but didn’t start and have had to wait patiently for my chance.

“Thankfully I got it and have taken it and, after playing alongside Tom (Davies) in pre-season, we have linked up together in the last few games.

“Tom is a good talker and defender and we have built up a defensive partnership.”

Wright is now keen to keep his spot in the starting XI and help Stanley secure a promotion spot.

“Personally my aim is to stay in the team and perform well and, for the team, the aim is going up either through the play-offs or preferably automatically. I think we are more than capable of going straight up.”