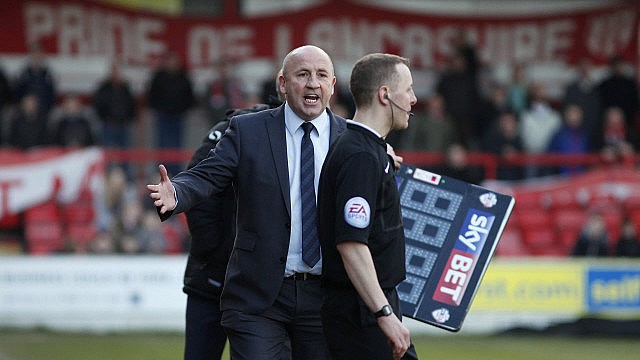 We will go again: Coley

John Coleman admitted today’s 2-1 loss at Exeter was a setback but he knows his promotion-chasing side will be ready to go again.

Stanley hit the woodwork twice and had opportunities in tricky conditions but it was Exeter who clinched the three points.

“It is a setback and we have to dust ourselves down and go again,” said Coleman.

“There was some excellent football played in the first half by both teams and, because of the conditions, the game was always going to be decided by a scrappy goal and so it proved.

“I can have no complaints – you have got to give credit to Exeter. What we have got to do is take our chances when we are dominant. If we do that, we will win more games than we are doing but we need to convert chances into goals when we are on top.

“We did not start well and our keeper had made three saves before we got going and then we broke away within two and a half minutes and scored.

“Two and a half minutes later and they have equalised. I don’t know if it was off-side, but we don’t play off-side. He hit it well but we are disappointed with their goal.

“We got on top towards the end of the half and in the first 25 minutes of the second half we were comfortable. We hit the woodwork twice – one hit the inside of the post and bounced across the goalline and was cleared and then the next hit the crossbar and fell to one of their players to clear

“Then, in our area, the ball’s fallen to one of their players and they score the winner. You get that luck sometimes and it’s football.”