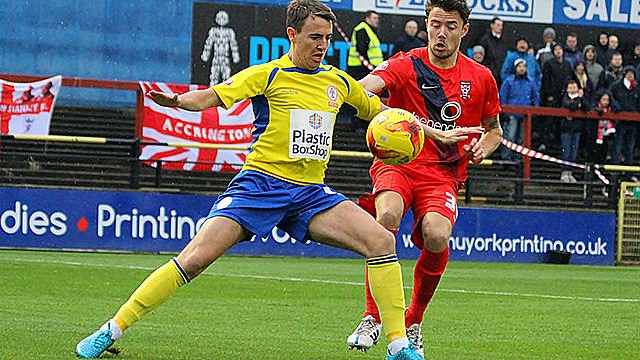 Sean McConville is aiming to help Stanley onto a winning run at home and replicate the 2011 play-off season.

The seventh placed Reds have up to four games in hand on the teams above them – all to be played at the Wham Stadium.

McConville was part of the successful Stanley team which hit the heights of the top seven five years ago and he believes this team can repeat that achievement.

“In the play-off season we were around 17th come Christmas and I think we had a lot of games left then,” said the winger.

“I remember us playing Saturday-Tuesday and it just snowballed. Going into every game, we had confidence and I feel our away games are like that this season.

“Now we need to do that at home. We are in seventh place with games in hand and we feel the only way is up and we are looking at the automatic promotion spots.”

With the new reduced match-day prices at Stanley – with an adult now paying £15 instead of the  £20 walk-on fee from 2015 – McConville hopes the crowds come out to cheer them to success.

“It’s a massive plus having a big crowd. We play Portsmouth tomorrow and they will bring a lot of fans and it will be a fantastic game as we both play football the right way.

“People who are at home are missing out as it’s a great opportunity to see two teams, who both believe they will be promoted, have a real good go at each other.

“We obviously know each other well, with Cooky (Paul Cook) and Leam (Richardson) there and that gives it a more competitive edge. Cooky won’t want to lose the game and the gaffer will want to win it which means there is a bit more to it and that’s why it will be an exciting game. They will certainly get value for money.”

The two sides have already met twice this season – a goalless draw in the league and Portsmouth won 1-0 in the FA Cup – both at Fratton Park.

“Portsmouth are one of the best teams in the league but, with having a number of home games postponed recently, we can’t wait to get out there and show what we can do.”