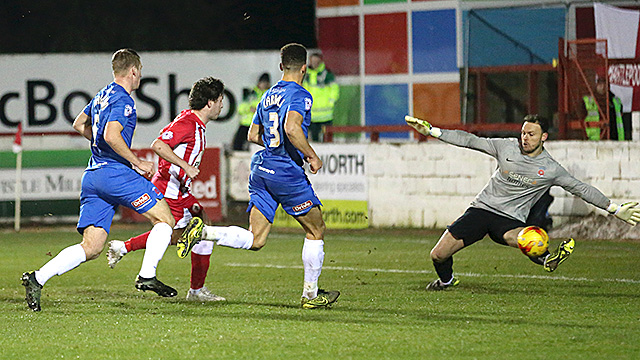 Stanley returned to the Wham Stadium with a win after overcoming Hartlepool United 3-1.

Adam Buxton gave Accrington the lead midway through the first-half with a fabulous free-kick before Shay McCartan stole the show with two excellent goals.

A late consolation from Rakish Bingham was all Pools could leave Lancashire with.

It had been over two months since Stanley last took the field at the Wham Stadium and the home side made a bright start.

Billy Kee held up a long pass well to allow the midfield to get forward and bring Matt Crooks into play.

The midfielder cut onto his left foot and curled an effort towards the top corner from 25 yards out. Hartlepool goalkeeper Trevor Carson did superbly well to tip the shot wide of the right hand post.

The Northern Irishman was again at hand to deny Stanley and compatriot McCartan after good link up play with Sean McConville.

Accrington were rewarded for their efforts halfway through the opening 45 minutes with a thundering strike from fullback  Buxton.

Having not started since October against Dagenham and Redbridge, the 23-year-old made his opportunity count after finding the top corner with a free-kick on the edge of the area following a foul on McCartan.

The visitors responded and debutant Ellis Harrison was a coat of paint away from equalising instantly for Ronnie Moore’s men.

Nicky Featherstone’s corner to the back post was won well by the Bristol Rovers loanee, but watched his header cannon off the woodwork and cleared away from danger.

After signing a new contract at the Wham Stadium earlier this month, Matty Pearson almost marked his first home match since extending his stay by doubling Stanley’s lead. His header from McConville’s corner crashed against the post and back into play.

As half-time appraoched, the Reds did manage to find a second and it was another change to the starting eleven who got himself on the scoresheet.

A groin injury to Josh Windass gave McCartan the chance to make a first start of the campaign and the attacking midfielder didn’t disappoint, scoring his second goal of the season.

The 22-year-old’s deft touch past Adam Jackson put McCartan through on goal and the Northern Irishman cooly found the corner with a low strike.

Stanley continued to dominant after the break as a well worked free-kick routine created space for Kee to try his luck from the edge of the box, but Carson was equal to the shot.

Just past the hour mark, McCartan scored his second and Accrington’s third of the night with another fine effort.

The attacking midfielder received a pass on the the right corner of the area before coming inside a firing low into the bottom corner.

The home side carried on looking to strengthen their grip on the game, but it was Hartlepool who pulled one back through Rakish Bingham.

A driven shot from the striker flew past Jason Mooney and prevented a Stanley clean sheet for the seventh successive league game.

Substitute Terry Gornell had one final chance to find a fourth, but his shot was well blocked after the striker had raced away on goal.