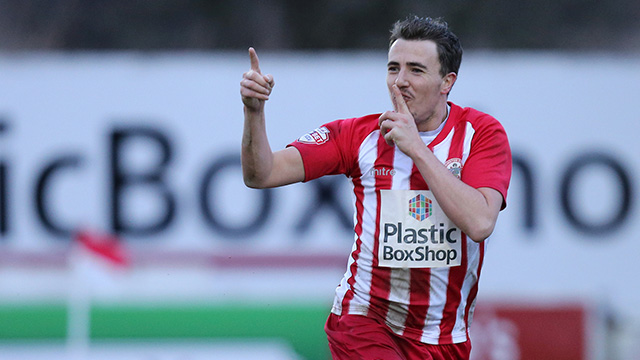 The decisive goal came from Sean McConville late in the second-half and moves Stanley up to fifth in the League Two table.

John Coleman made one change from the side that lost at Exeter City last weekend as goalkeeper Ross Etheridge made his Football League debut in place of Jason Mooney.

Shay McCartan came close to continuing his excellent run in front of goal during the early stages as the attacking midfielder’s header flew inches wide of the top corner from Piero Mingoia’s teasing cross.

The visitors were looking for a second away victory in a row after beating Oxford United in their last trip on the road. Rory Gaffney rose the highest to win Liam Lawrence’s corner in the air, but the striker’s header sailed just past the post.

Stanley midfielder Matt Crooks looked to create for the home side with a couple of bursting runs from deep. A shot from 25 yards out couldn’t test Rovers goalkeeper Steve Mildenhall after the 22-year-old failed to connect well with the effort.

Adam Buxton was on target during Accrington’s last home match and came close again with a fine shot as the half-time whistle approached.

The full back came inside from the left hand wing before unleashing a low driven effort, but Mildenhall was equal to it and parried the shot out of harms way.

The second half began much as the first ended with Buxton trying his luck from long range and the Rovers’ goalkeeper denying Accrington from taking the lead.

A long ball forward from the visitors was well won by Matty Taylor into the the path of Lawrence before the winger fired his attempt straight at Etheridge from close range.

Stanley continued to create the better chances in a very tight match and McConville forced a superb save from Mildenhall to keep the winger’s diving header out.

Having signed a new contract earlier this week, McConville capped off a good seven days by breaking the deadlock for Accrington with 20 minutes remaining.

The winger brought the ball onto his right foot on the left hand side and played a cross into the box.

Crooks and Billy Kee were not able to get a toe on the cross and the ball managed to find its way into the bottom corner for McConville’s fifth league goal of the season.

Coleman’s men looked to double their lead with the visitors leaving space at the back and Crooks had the perfect chance to put the game beyond doubt.

Kee’s pass to Mingoia allowed the winger time and space to find an umarked Crooks on the edge of the six yard box, but the midfielder fired well over the bar.

Bristol Rovers made changes to push for an equaliser in the final few minutes, but Stanley held on to pick up three vital points over their promotion rivals.