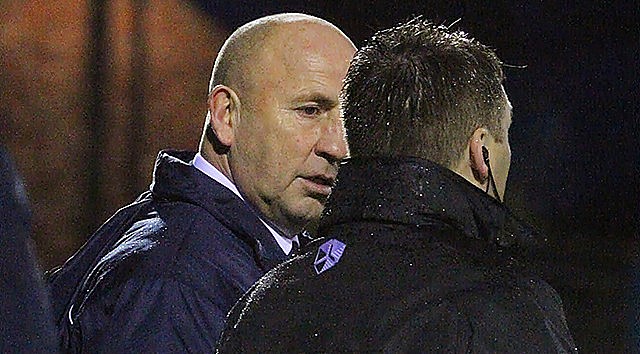 John Coleman says he is struggling to ‘keep a lid’ on his players as they are so desperate to play at home.

The Reds last played at the Wham Stadium on November 14th in a 2-2 draw with Newport with four League Two games at home postponed since then due to the torrential weather.

Stanley now have two home matches in four days as the Reds take on promotion rivals Portsmouth on Saturday and then it’s Hartlepool a week today in one of those rearranged games  – and Coleman says the players can’t wait.

“The players are really keen in training and the problem is keeping a lid on them so they don’t overdo it and get injured,” said Coleman, with his side in seventh spot.

“They are jumping out of their skins to play at home. It has been frustrating and Saturday is a big game as we didn’t feel we did ourselves justice when Portsmouth beat us in the FA Cup last month.

“We want to right those wrongs but they have hit a good run of form and so we know it will be difficult.

“Our home games are important. The last time we got promoted, we went on a great run at home which took us into the play-off spots. Hopefully we can enjoy another good run at home and, as we are already in the play-off places, it can take us into the automatic promotion spots.”

A number of clubs around the Reds, such as Exeter and Oxford, are enjoying their moment in the spotlight in the FA Cup and, while Coleman admits there is a feeling of regret due to the finances involved, he says his focus hasn’t changed.

“Their players are getting recognised and they are in the spotlight for a short  period of time, and obviously they will benefit from the money it brings as well, but it can be a distraction.

“There are seasons littered with great FA Cup runs and then teams have fallen away in the league and so we know what our focus is.”

Coleman added that the pre-contract agreements which have been signed by Stanley players Matt Crooks and Josh Windass with Rangers won’t affect their performances from now until May.

“Josh has been injured anyway but Crooksy has been very good in training so there are no problems there,” said the Reds boss.