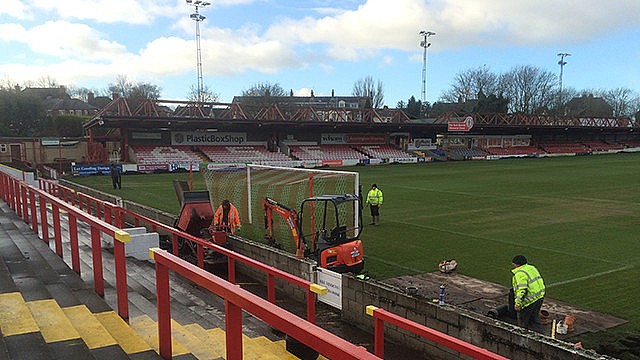 Extensive work on the pitch and the drains at the Wham Stadium has left Stanley manager John Coleman confident that Saturday’s game with Portsmouth will go ahead.

The Reds welcome Pompey this weekend after two months of heavy rain that has seen no football played down Livingstone Road since mid-November.

But intensive attention to problem areas and an overhaul of drainage for the last few days means Coley feels that the battle against the elements is being won.

“I’m really hoping the game will be on Saturday will go ahead,” he said. “From all the indicators I’ve seen it will be on. Andy, the new owner, has been up to his knees in mud for the last three or four days and he’s determined that it’s going to be on. I’ve got every confidence that it will be on.

“Well done to everyone who has helped put in the new drains and do everything possible to help the pitch. We’ve brought new covers in for the frost too so every indication is that the game will be on and I’m really looking forward to playing.

“We’re straining at the leash to play. We were in Sunday, Monday and Tuesday so we’ve had ample time to get a few things across to the players.

“From a football point of view we have to make sure we don’t fluff our lines after having so many home games off and take the three points.” 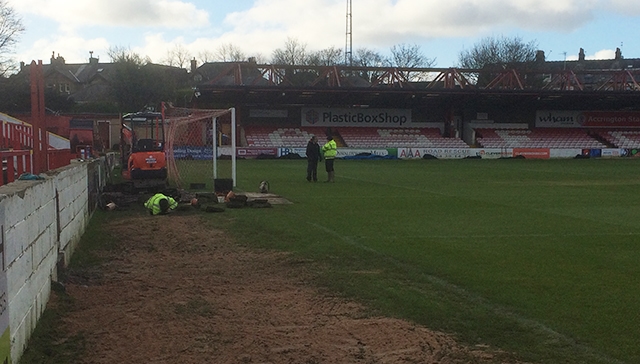 The Stanley players are based at the Wham Stadium and have seen work progress, with midfielder Sean McConville impressed with the efforts being put in.

“The lads have seen all the work going on with the pitch and the drains and I know we’re all looking forward to getting out there on Saturday and I’m sure the fans feel the same,” he explained.

“It’s a compliment to the new owner that all this is being done. In days gone by it was just (groundsman) Buzzer out there with a fork and he’s had a bit of a thankless task. He works his socks off and I don’t think he gets enough credit but I’m sure he’s going to be pleased with all the help he’s been getting and all the work that’s been going on.

“The players are really happy with what’s been happening. We just want to play, and win, games of football.”