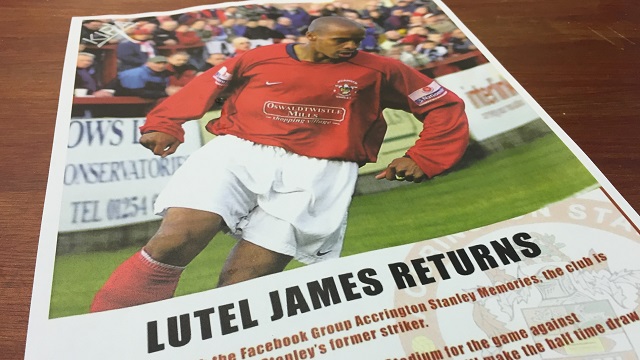 Join Lutel for Lunch in the Lounge

Former Stanley striker Lutel James will be the Guest of Honour at our game against Crawley Town on Saturday 13th February, and you can join us for lunch in the Match Day Guest Lounge.

The St Kitts and Nevis international joined Stanley in 2001/02, scoring twenty goals in his first season.  He was an instrumental figure in the side that secured promotion to the Nationwide Conference in 2002/03, and he was involved throughout the 2003/04 season, which included our famous FA Cup run.  He left the club during the 2004/05 season, always to be remembered as a Stanley legend!

His visit will be the first in a series of appearances from Stanley legends at our home games, with several more planned ahead of our final game of the season in May.

Our match day guest packages cost just £50 plus vat per person, and include car parking, programmes and team sheets, access to a pay bar, a pre-match buffet, and the option to watch the game from the comfort of the lounge or from reserved seating on the half way line.

Contact the commercial team now on 01254 356950 or email commercial@leescarter.com for further information or to book your place!