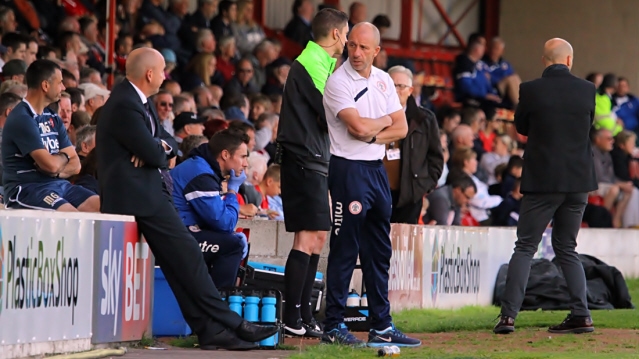 Coley: get back into the groove

John Coleman expects a return to the Wham Stadium to be just like riding a bike for his players this evening.

The Reds host Hartlepool United after eight weeks battling the elements without a home fixture going ahead.

They remain in a play-off place in League Two despite no game of any kind since 2nd January and the Stanley boss does expect his players to be a little rusty as they take to the field.

“As much as you try to guard against it you just have to hope that it doesn’t affect them too much,” he explained. “Once you start playing it isn’t a problem; a footballer knows how to play football and doesn’t forget and hopefully we can get back to our normal selves as quickly as possible in the game.

“Jimmy Bell joked that he wouldn’t mind never playing again if we stayed in seventh spot but I’m still aiming to try and get higher than that. I still have an eye on the automatic places but the more you have to play catch up the more difficult it gets because your margin for error gets smaller and smaller, especially given the way the top two teams have just carried on winning.

“Hartlepool are a team who have got good players. They can hurt any team as they showed against Wycombe on Saturday. We’ll be showing them all the respect they deserve and preparing well.”

Coleman has known his opposite number Ronnie Moore for a long time and has been keeping him up to date with the East Lancashire weather as kick off gets closer.

He feels there’s rivalry but no animosity between the two.

“I know Ronnie really well, I think he’s a really good manager and he knows the game inside out,” said Coley. “He’s a bit like myself, he doesn’t suffer fools, says what he thinks and has been and continues to be a good manager who is doing well.

“I know he’ll prepare his team to come and win the game, we’ll be aiming to win the game too so it should lend itself to a good open game of football.

“I think as men we’re both quite level headed and grounded and coming from the same part of the world helps. We have an affinity with each other, we’ve been in touch about the pitch and the weather over the last few days hoping to get the game on and we get on really well, and apart from the 90 minutes tonight I wish him really well.”