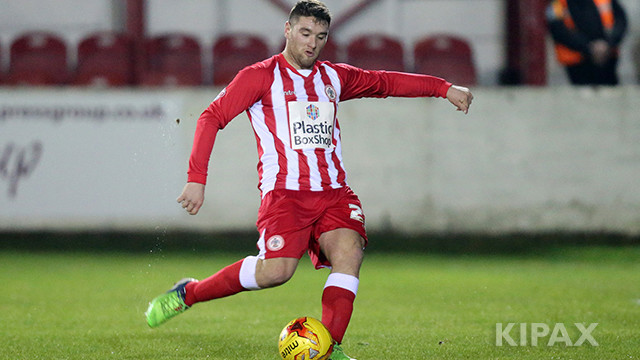 Adam Buxton insists Stanley’s players are looking forward to the long trip to Devon to take on Exeter this weekend.

The Reds are racking up the miles once again and set off this morning to train in Gloucestershire before heading all the way down the M5.

It’s the sort of journey that could take its toll on the legs but the full back thinks it’s one to relish.

“It’s not really an issue,” he insisted. “You get used to travelling in this division because you do it so much. I don’t mind them. We just look forward to the game on a Saturday, wherever it may be.

Buxton returned to the starting eleven for the midweek win over Hartlepool and chipped in with his first goal of the season, a fine free kick from the edge of the box.

Now his aim is to keep his place at St James Park.

“It’s always good to get back in the team when you’ve been out for a long time,” he continued. “You just have to be patient, keep working hard in training and when you get your chance, take it. Luckily enough I got that chance and I thought I took it. It was nice to get a goal as well, I take free kicks every day in training and it was good to see one of them come off.

The Reds sit sixth in the League Two table ahead of kick off and Buxton sees no reason why they can’t maintain a promotion push until the end of the season.

“When you’re made favourites for relegation every year you’re not really supposed to think about going up but once we started playing games in pre-season and beating good sides like Burnley the lads started thinking we had a chance,” he concluded.

“Everyone has pulled together, we’re all moving in the same direction and we’ve got such a strong squad. Who knows what could happen. I think we’ve got a great chance.”