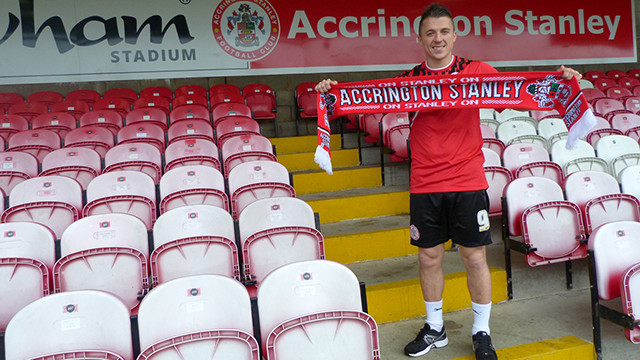 Midfielder Scott Brown has signed a deal with Accrington Stanley until the end of the season.

The 30-year-old has been released by Grimsby and is looking to make an impression with the Reds for the rest of the campaign.

“I was at Southport with John (Coleman) and Jimmy (Bell) so I know them well,” said the former Everton, Bristol City, Morecambe, York and Fleetwood player.

“I went to Grimsby and we got to the play-offs last season but I broke a bone in my ankle in pre-season and so I haven’t been playing and it hasn’t worked out for me.

“Coley got in touch and gave me the opportunity to come here and it’s great to be back in the league.

“I know a lot about the gaffer and Jimmy and Accrington are obviously doing well this season.

“I obviously know Terry (Gornell), Bazza (Anthony Barry) and have played against Proc. It’s a case of trying to break into the team now.”

“He did ever so well in helping us avoid relegation at Southport and if we’d had better finances in place we probably would have signed him here in the summer but it just wasn’t to be.

“I’m grateful that I’ve got the chance now and I know that he is keen to grab his chance with both hands.

“He’s a good character, he’s got a tremendous will to win and he’ll fit in with our lads seamlessly.”