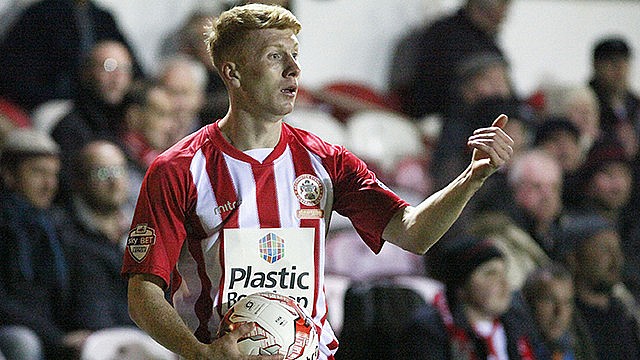 Brad Halliday is hoping to celebrate promotion with Accrington Stanley after extending his contract until the end of the season.

The right back’s initial loan spell from Middlesbrough was up after Stanley’s 3-2 victory at Mansfield on Saturday but he has put pen to paper on  deal which will keep him with the Reds until May.

“I am thoroughly enjoying it here,” said the 20-year-old. “All the lads here made me feel welcome, it’s a nice family club, and there have been a few ups and downs in terms of results but it has mostly been positive.

“I started the season going out on loan at Hartlepool and then I came here and it is nice to know where I will be for the rest of the season. It would have been hard to go back to Middlesbrough and then be sent out on loan again. This has given me some security. It was similar to last season where I went on loan to York and then had it extended until the end of the season.

“I scored in my final game for York at Portsmouth so my aim now is to get a goal for Accrington and also to help Accrington challenge at the top end of the table.

“With York it was a relegation battle but, at the top end, you get a lot more respect from teams and we have earned the right to be where we are. It is enjoyable and now the aim is to get as many wins as we can.”

Stanley boss John Coleman said: “Brad has settled in really well at the club and is an asset to the team. We are delighted to have him here until the end of the season and we hope he can carry on his rich vein of form.”