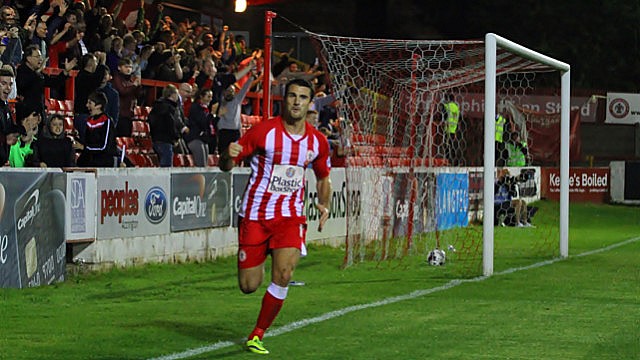 Terry Gornell was pleased to be back on the scoresheet after netting the winner at Mansfield on Saturday.

The striker scored the crucial third goal at the One Call Stadium to guide Stanley to a 3-2 win.

And after limited first team opportunities in recent months the striker admitted it was good to make a key contribution.

“It was a bit of joy and a bit of relief to be honest,” said the 26-year-old, who was a second half substitute. “It was a massive three points and we knew that before the game. The gaffer stressed how important three points at Mansfield was on the back of a defeat and told us that good teams don’t lose two on the bounce.

“Fortunately it turned out that we bounced back well and took all three points away from a difficult place.

“I thought we started brilliantly and we were in control. We were causing them all sorts of problems but a couple of mistakes here and there gave them a bit of a leg up, the crowd got behind them and they got the goal and the game definitely changed after that equaliser. I thought towards the end of the half we were hanging on a bit and we didn’t come out of the blocks too well in the second half but subs are there to try to make a difference and luckily that went for us.

“It was a bit of a surprise to see it hit the post initially because I caught the header well and I thought it was in. When it came back out to me I was desperate to get it on the end of it and lift it as high as I could over big Jensen. I managed to avoid him and luckily it went in.”