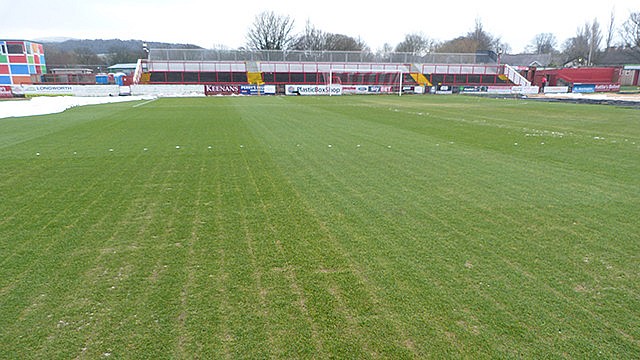 John Coleman is hopeful Accrington Stanley will finally play at home tomorrow night with the weather, at the moment, positive for the Hartlepool clash.

The Reds last played at home on November 14th 2015 and have had five successive games called off since then due to the extreme weather – a waterlogged pitch caused the first four postponements and heavy frost led to Saturday’s clash with Portsmouth being called off.

“I have been out on the pitch and if we could play now it would be on,” said Coleman at his Monday morning press conference.

“We haven’t had a lot of luck with the weather – lots of our games which have been postponed could have been played the day before or the day after although that possibly wouldn’t have been the case with Saturday.

“If we can get enough protection, we are positive but we are in the lap of the Gods. We’re hoping it isn’t as cold as it has been over the weekend.”

Coleman says the players can’t wait to get out and play at the Wham Stadium.

“It’s really frustrating as you build up to the game all week and then it’s taken away and it’s an anti-climax.

“It’s been difficult to train as well with the weather. Everyone has been mucking in to try and get the games on and I always say that’s what’s unique about this club – the spirit.

“If the youth team and ground staff can put covers on then why can’t the first team as well? The spirit we have here is special and that’s something it has always has been since I have been here.”