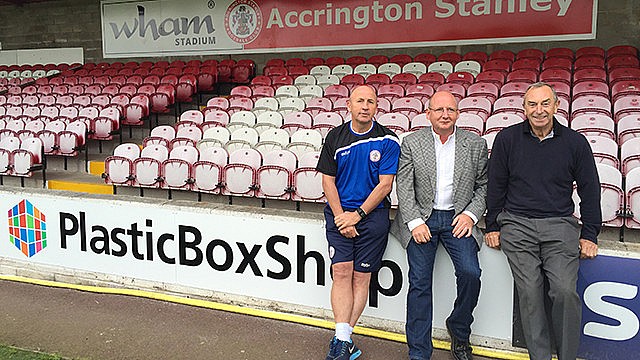 Back the boys: Andy Holt

Stanley’s majority shareholder Andy Holt is urging fans to get behind the whole team and cheer the Reds to promotion.

Matt Crooks and Josh Windass, who are out of contract at the end of the season, have signed pre-contract terms with Rangers in May but they will both available for the Reds until then.

As both players are under 24, Stanley will get some compensation for them but nowhere near the £1.5m Stanley value them at.

Crooks and Windass could still have a big part to play in Stanley’s charge for League One and Mr Holt wants everyone to push in the same direction.

“You can’t blame the lads. We are governed by the Financial Fair Play rules so we offered them the best contracts we could earlier in the season but we couldn’t compete with a club like Rangers,” said Mr Holt.  “They can offer four years deals at maybe 10 times the wages we can. Even if financially we could have offered more, the FFP rules mean we couldn’t.

“We value them both at around £1.5m and that would make a huge difference to a club like Accrington whose annual turnover is £1.5m and the fact Rangers can get them for next to nothing, to me, is a joke.

“I don’t have a gripe with Rangers but what I don’t agree with the rules that means players developed by other clubs can move to Scotland for virtually nothing and vice versa.

“John (Coleman) and Jimmy (Bell) have helped develop both Matty and Josh – there is no doubt about that. Where were Rangers when they were both released by Huddersfield and they couldn’t get a game anywhere else?

“Matty and Josh have been a big part of our success this season, we have definitely added to their career and developed them, and I do not blame them for wanting to improve themselves, I would have done the same. Whatever happens, we still have a good bunch of players at the club.

“What would be fair is us receiving full and fair value for them.

“It’s up to John now what happens in the January transfer window – whatever he decides I will back him 110 per cent. I am not sure what will happen at the end of the season as to whether we get £2 or £2m for them. It’s irrelevant at the moment as there are other crises to solve between then and now.

“If they stay, they don’t deserve a hard time. I expect, when they put the shirt on, they will give 110 per cent. They have done well, they have got attention, they have got a move as they look to fulfil their dreams and it is a short career.

“The positive we can take from this is that a club like Accrington can develop players like Josh and Matt. Despite our meagre resources, we have produced players like that – and there are more at the Wham Stadium.”